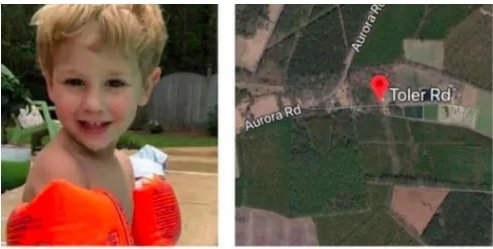 In January 2019 3-year-old Casey Hathaway was was playing with two other children in his grandma’s back yard in Ernul, North Carolina when he suddenly disappeared. After two days in freezing temperatures he was found alive in the woods about a quarter of a mile from where he disappeared. When asked how he survived he told rescuers a friendly bear took him in and kept him warm. Is it possible that this wasn’t a bear at all but a bigfoot?

Casey’s mom and grandma noticed he was missing when the two children he was playing with returned to the house without him. The children were outside playing for about 45 minutes and hadn’t noticed that Casey was gone. Casey’s mom immediately alerted the authorities who came out with over 500 volunteer searchers.

A mobile command unit was brought in with tents, port-a-potties and floodlights. Freezing temperatures and heavy rain caused the woods to become flooded and even more dangerous for Casey. The worsening weather meant that by the second day only trained rescuers were able to keep searching. Finally Casey was found calling for his mom, soaking wet, cold and tangled in thorn bushes. Rescuers had to wade through nearly waist-deep water to get to the toddler.

When questioned by authorities about what happened Casey said a bear became his friend and kept him warm and away from the water.

Many people online have speculated that this “bear” could actually have been a bigfoot. Spaced Out Radio speculated:

Casey said he spent two days hanging out with a bear. A bear! For the record, bears hibernate in the cold months of winter, and there are no reports available of bears coming out of hibernation to tend lost children. However, also on record, are many reports of Bigfoot helping lost children. The compilations of Bigfoot stories include myriad experiences where Bigfoot intervened in a lost child’s plight, and helped him survive.

So did Casey Hathaway spend two days with a bear, or did he spend two days with a Bigfoot? Could this big, furry creature, who many believe is just mythical, have cared for, and kept alive for two days in freezing, inclimate weather, a three year old toddler, who wandered off, and got himself into a perilous situation? Some may doubt such a thing; however, in the light of what we know about bears in winter, and Bigfoot’s documented interaction with other children, I am going with Bigfoot.

Is it possible that the “bear” was in fact a friendly bigfoot keeping Casey safe then dropping him off where rescuers could find him and escaping? Maybe! 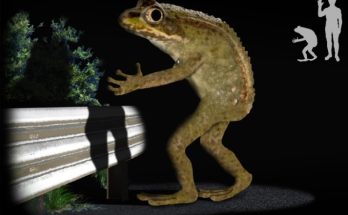 In newly discovered footage, “Bigfoot” is seen near Provo