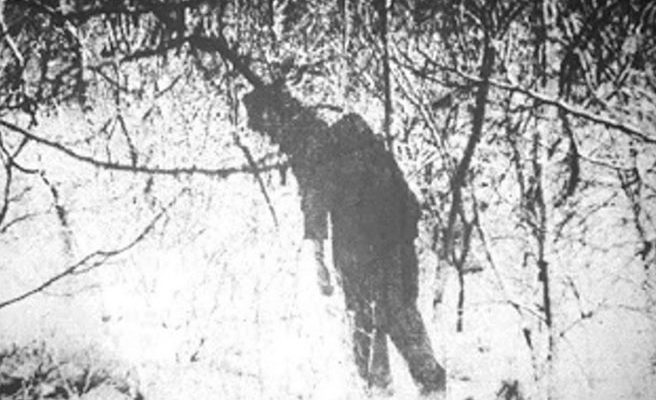 In the beautiful surrounds of Mount Greylock a bedraggled spirit affectionally nicknamed the Old Coot is often seen on ascending to the peak near Bellows Pipe and Thunderbolt Trails.

The snowy peak of Mount Greylock, home to the ghost of the Old Coot. Photo credit: Wikipedia.

In 1861 a farmer from North Adams named William Saunders, left home to fight in the Civil War. Saunders left his wife, Belle, and their children on their farm and promised to return before long.

While he was away fighting in the war Saunders sent hundreds of letters to his wife and children who waited faithfully for his return.

About a year after he left, his wife received a letter stating that Saunders had been seriously wounded by a cannonball during battle and was unlikely to survive.

This was the last news Belle ever received about her husband. Belle was deeply upset and feared the worst for her husband but continued to tend the farm and live in hope that he would still one day return.

She hired a young farm worker named Milton Clifford to help with the running the farm. As time went on she realised her husband must have passed away from his injuries and she eventually married Milton who adopted her children.

The war ended in 1865 and all of the soldiers returned to their prewar lives. One of these soldiers was an injured, bedraggled and unshaven William Saunders who had managed to survive his injuries and continue fighting in the war.

An exhausted and gaunt Saunders made his way back to his home town of Adams. The locals no longer recognized him due to his war injuries so he was able to anonymously inquire about his family before returning home. To his horror he was told his wife had moved on and his children were calling a new man “Daddy”. Saunders was devastated and instead of going to the farm to reunite with his family he retreated back into the mountains.

Near Mount Greylock in the remote portion of Bellows pipe he found a satisfactory spot and built himself a crude cabin. He lived out the rest of his days in this small cabin, occasionally going to work on neighboring farms. It is said he even went to work on his families home, joining his wife and children at the dinner table without being recognized due to scarring from his horrific injuries.

The locals called him “Old Coot” as he refused to give them his real name. He embraced his new name and became a part of the scenery at Mount Greylock.

One cold January day some hunters stumbled upon Old Coot’s shack and went inside for shelter. Inside they found the body of Old Coot who seemed to have passed away some time before.

Either way, one cold winter day in January, hunters stumbled upon his shack, where they found Old Coot dead. It was one of the coldest winters on record and it appeared that poor William Saunders had frozen to death in his bed. They were more than frightened when his spirit jumped from his body, bolted out the door and flew up the mountainside. To this day, his “bedraggled spirit” is seen on Mount Greylock, always ascending the peak near Bellows Pipe and Thunderbolt Trails, but never reversing direction.

Sightings of the Old Coot of Mount Greylock

The photo of the civil war soldier in the woods reported to be The Old Coot of Mount Greylock. Photo credit: The Yankee Express.

In 1939 the January 19th edition of the North Adams Transcript told the story of the Old Coot. The next week a reader had written in with a photograph claiming he had seen the ghost of the Old Coot and managed to capture a picture.

The reader claimed to have been on a ghost hunting expedition near Mount Greylock. He was alone at his camp when he suddenly saw a strange old man trudging through the snowy woods towards him. The man was very skinny and wearing a ragged Civil War uniform.

The reader thought the man was interesting enough to photograph so he took his camera out and got it ready to take a picture. As he did this the man took off at an unnatural speed. By the time the reader had his camera ready and snapped a photo he was almost out of sight.

Since this sighting many hikers on the trails in the area have seen humanoid figures skulking amongst the trees and heading towards the peak of the mountain. It seems the Old Coot of Mount Greylock is still trying to find peace in his mountain home.

If you enjoyed this article you may also be interested in the story of the Dungarvon Whooper or the Elmore Rider.