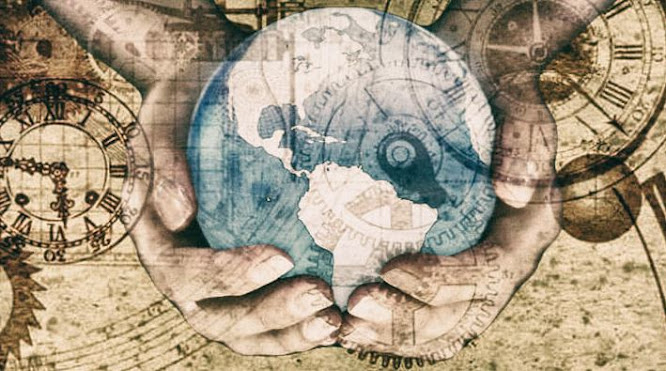 Various ancient maps discovered throughout time reveal a slightly different reality than what we’ve been accustomed to, with the most astounding find being the continent of Antarctica, mapped by the ancients at a time when this southernmost landmass was free of ice.

Since birth, people are hard-wired to adhere to a dogmatic reality with a narrow view of the world. As time passes, evidence contradicting this paradigm is brought to our attention, and so we rapidly adjust our way of thinking to a bigger picture that doesn’t appear to be framed, nor acknowledged by modern understanding.
One of the most substantial examples is that of ancient sailors who were apparently able to traverse the planet from one pole to another.
These people had advanced knowledge in many fields, and were able to produce precise charts of the world using an instrument of navigation for accurately determining longitudes that was beyond anything possessed by either of the ancient, medieval, or modern people up until the 18th century.
Because of this evidence that cannot be in any way hindered or disproved, we can assume that a long-forgotten civilization thrived on this earth in remote times. Evidence is mounting in this direction, and those who reject this hypothesis as mere myth will soon have to rethink and redesign the entire concept of human history.
Among the many paradigm contradicting pieces is the Oronteus Finaeus map. Published in 1531, it displays Antarctica free of ice, together with accurate depictions of rivers, valleys, coastlines, and the approximate location of the south pole. It also gives the appropriate longitudinal coordinates.
Keep in mind that Antarctica was barely discovered (at least by modern standards) in 1773, after Captain James Cook and his crew reached the islands of the Antarctic Circle, but none set foot on the actual landmass until the Norwegian expedition in 1911. 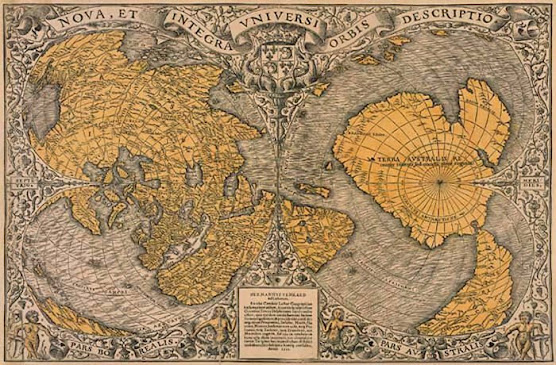 Map drawn in 1531 by Oronteus Finaeus / Antarctica on the right side with no traces of ice and defined relief
This could mean two things. Either the presented map is an elaborate forgery, and as you’re about to see this comes out of the question, or human beings are once again rediscovering a land and knowledge that was once lost to the infamy of time.
This, in turn, adds to a greater pile of ‘controversial’ evidence that hints at the very same thing – the existence of an advanced civilization before or during the last ice age.
The highlighted world-map was drawn by Oronteus Finaeus in 1531. It compiled various source maps that made it out of the great library of Alexandria during the ruthless siege of Egypt.
Those sources originated from a peoples unknown that allegedly passed down the information from one generation to another. Egyptian cartographers who studied that information made various charts that were transferred to Constantinopole and other cultural centers after the siege of Alexandria.
The maps were stored there until 1204 when, during the Fourth Crusade, Venetians besieged Constantinopole and numerous valuable resources fell into their hands. Since then, the charts made it into circulation because they showed never before reached areas such as the Americas, Arctic and Antarctic seas.
Charles Hapgood, an esteemed American writer and professor, came across the intriguing chart during his early studies in the 90s. After devoting a great deal of time analyzing it, he reached the aforementioned conclusions.
Although the scientific community couldn’t agree with his paradigm-shattering finds, he carried on with his investigation that eventually yielded the expected results. Here is an excerpt from his work on the Oronteus Finaeus map.
“The general shape of the continent was startlingly like the outline of the continent on our modern map. The position of the South Pole, nearly in the center of the continent, seemed about right. The mountain ranges that skirted the coasts suggested the numerous ranges that have been discovered in Antarctica in recent years.” 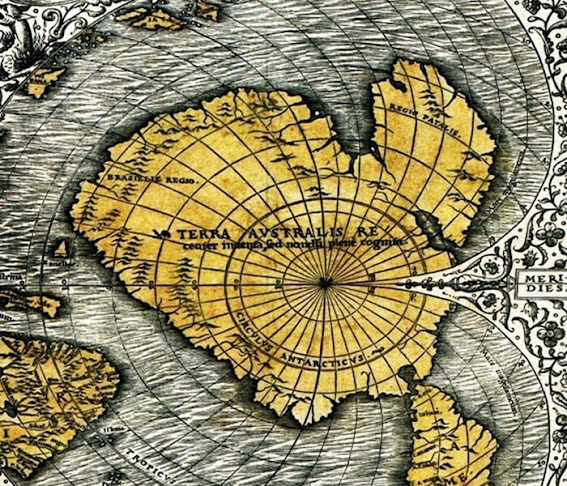 Antarctica seemed quite hospitable in its remote past
“It was obvious, too, that this was no slapdash creation of somebody’s imagination. The mountain ranges were individualized, some definitely coastal and some not.
“From most of them rivers were shown flowing into the sea, following in every case what looked like very very natural and very convincing drainage patterns. This suggested, of course, that the coasts may have been ice-free when the original map was drawn.”
In 1960, Professor Hapgood delivered his findings to the US Air Force which performed a thorough analysis of both the Oronteus Finaeus map and the Piri Rei’s map of the Turkish Admiral.
In 1961, he received a response that would please him and further confirm his beliefs, although the rooted conceptions of the scientific community remained unchanged.
Nevertheless, the idea of a timeworn and ‘modern’ civilization that existed before our current timeline transformed into a solid pillar, hard, if not impossible to crack.
The below transcript received by Professor Hapgood from the US Air Force investigation team represents the culminating point of this investigation due to its official nature.
—
8 RECONNAISSANCE TECHNICAL SQUADRON – (SAC)
UNITED STATES AIR FORCE
Westover Air Force Base, Mass.
14 Aug 61
Mr. Charles H. Hapgood
Keene Teachers College
Keene, N.H.
Dear Professor Hapgood:
It is not very often that we have an opportunity to evaluate maps of ancient origin. The Piri Reis (1513) and Oronteus Fineaus [sic] (1531) maps sent to us by you, presented a delightful challenge, for it was not readily conceivable that they could be so accurate without being forged. With added enthusiasm we accepted this challenge and have expended many off duty hours evaluating your manuscript and the above maps.
I am sure you will be pleased to know we have concluded that both of these maps were compiled from accurate original source maps, irrespective of dates. The following is a brief summary of our findings:
A. The solution of the portolano projection used by Admiral Piri Reis, developed by your class in Anthropology, must be very nearly correct; for when known geographical locations are checked in relationship to the grid computed by Mr. Richard W. Strachan (MIT), there is remarkably close agreement.
Piri Reis’ use of the portolano projection (centered on Syene, Egypt) was an excellent choice, for it is a developable surface that would permit the relative size and shape of the earth (at that latitude) to be retained. It is our opinion that those who compiled the original map had an excellent knowledge of the continents covered by this map.
B. As stated by Colonel Harold Z. Ohlmeyer in his letter (July 6, 1960) to you, the Princess Martha Coast of Queen Maud Laud, Antarctica, appears to be truly represented on the southern sector of the Piri Reis map.
The agreement of the Piri Reis Map with the seismic profile of this area made by the Norwegian-British-Swedish Expedition of 1949, supported by your solution of the grid, places beyond a reasonable doubt the conclusion that the original source maps must have been made before the present Antarctic ice cap covered the Queen Maud Land coasts.
C. It is our opinion that the accuracy of the cartographic features shown in the Oronteus Fineaus [sic] Map (1531) suggests, beyond a doubt, that it also was compiled from accurate source maps of Antarctica, but in this case of the entire continent.
Close examination has proved the original source maps must have been compiled at a time when the land mass and inland waterways of the continent were relatively free of ice. This conclusion is further supported by a comparison of the Oronteus Fineaus [sic] Map with the results obtained by International Geophysical Year teams in their measurements of the subglacial topography.
The comparison also suggests that the original source maps (compiled in remote antiquity) were prepared when Antarctica was presumably free of ice. The Cordiform Projection used by Oronteus Fineaus [sic] suggests the use of advanced mathematics. Further, the shape given to the Antarctic continent suggests the possibility, if not the probability, that the original source maps were compiled on a stereographic or gnomic type of projection (involving the use of spherical trigonometry).
D. We are convinced that the findings made by you and your associates are valid, and that they raise extremely important questions affecting geology and ancient history, questions which certainly require further investigation.
We thank you for extending us the opportunity to have participated in the study of these maps. The following officers and airmen volunteered their time to assist Captain Lorenzo W. Burroughs in this evaluation: Captain Richard E. Covault, CWO Howard D. Minor, MSgt Clifton M. Dover, MSgt David C. Carter, TSgt James H. Hood, SSgt James L. Carroll, and A1C Don R. Vance.
LORENZO W. BURROUGHS
Captain, USAF
Chief, Cartographic Section
8th Reconnaissance Technical Sqdn (SAC)
Westover Air Force Base, Massachusetts
—
The above transcript is not the sole piece of official evidence gathered in support of his claims. Professor Hapgood received other fascinating letters from MIT, and Cambridge university, as well as other correspondence between the Turkish embassy and the US State Department.
More ancient and mysterious maps are presented in his book written in 1966 – Maps of the Ancient Sea Kings.