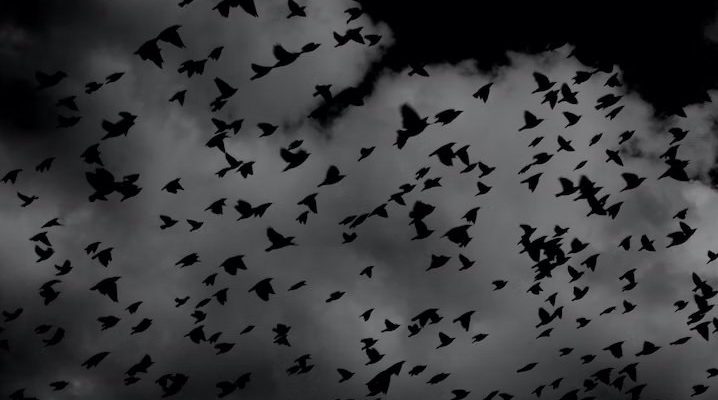 A flock of ravens… or are they sluagh? Photo: Unsplash.

In Irish folklore the sluagh, pronounced sloo-ah, are a dark type of faerie that take the form of a flock of birds. They are said to be able to pick up a human being and fly away with them or even steal their souls.

The sluagh are a type of faerie that has embraced the darkness and become evil. They are said to be evil without reason, have no loyalty to anyone and bring chaos wherever they go.

The sluagh are said to be very thin and haggard looking with skin clinging to their bones. They have leathery wings that cling to their bodies like a cloak when not in flight. They have bony hands and feet with claws, sparse patches of dark hair covering their bodies and sharp teeth protruding at odd angles from a beak like mouth.

When in flight they fly together in a crescent formation similar to a flock of birds. While appearing to be quite frail they are said to be able to pick up an adult human while in flight.

From a distance a pack of sluagh look just like a flock of ravens but upon closer inspection it can be seen that these aren’t any ordinary birds.

In some traditions the sluagh are said to be the souls of evil humans, cursed to forever wander the earth after their deaths. They feed on the souls of the living to sustain themselves.

Some believe the sluagh is a harbinger of doom, appearing before horrible events are about to occur.

The sluagh look for humans who are about to pass away and swoop in from the west and steal their souls before they can be given their last rites. Because of this sometimes the Irish make sure all west facing windows are closed when someone is on their deathbed.

How to Summon the Sluagh

It is possible to inadvertently summon a sluagh by saying their name out loud. It is also possible to attract the sluagh if you are feeling sad or hopeless. The sluagh are drawn to people who are grieving or depressed. It is said that when people die of a broken heart it is actually the sluagh that have claimed them.

Once you’ve attracted the attention of the sluagh the only way to be sure to escape them is to sacrifice another human to be taken instead. You can also try to evade them by running indoors and staying there until daybreak.

You can protect yourself from the sluagh by staying away from secluded areas such as forests and wilderness areas.

Once a soul has been taken by the sluagh there is no escape, not even in death. You are doomed to become one of the sluagh, circling dark skies and stealing souls for all eternity.

Encounters with the Sluagh have been reported for over a thousand years in Scotland and Ireland with some other accounts popping all across Europe.

From 1908-1910 a scholar named W.Y. Evans-Wentz, travelled through England, Ireland and Scotland collecting first-hand accounts of encounters with the fae folk, including the sluagh. He collated them into a book called The Fairy Faith in Celtic Countries.

Included in this book was the story of a child from the island of Barra in Scotland. The locals claimed the boy was taken by the sluagh and his body was found behind the parents home the next day having been dropped from a great height.

Many historians would claim the sluagh are simply a coping mechanism for unexplained and unexpected death or a misidentification of crows or ravens. While this no doubt accounts for some of the stories of the sluagh we can’t be certain that they are not lurking out there somewhere in the hidden places across Europe.