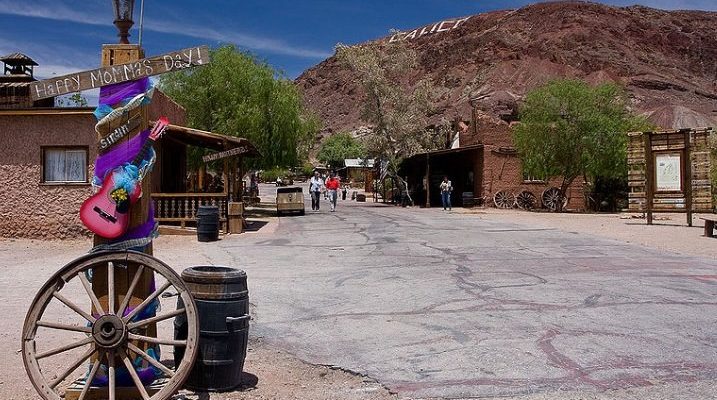 Calico Ghost Town in the Mojave Desert was once a booming gold rush town and is now a tourist attraction, campground and reportedly a home to several ghosts.

Calico, California is a silver mining town from America’s Old West that was established around 1881. It is nestled within the Mojave Desert with the extremely hot and dry weather that comes with it.

Calico rocketed in growth from nothing to just over 3500 people in 1890. At it’s peak the town had a meat market, bars, brothels, five general stores, three hotels, three restaurants and several boarding houses.

Unfortunately for Calico the value of silver was soon to be regulated and the Silver Purchase Act of 1890 drove down the price of silver to the point that mining in the desert conditions of Calico was no longer financially viable.

The decrease in the value of silver led to many abandoning the trade for greener pastures and by 1900 Calico had become a ghost town.

Several efforts were made to revive the town but none were very successful.

In 1950 the town of Calico was purchased by Marvin Knott of Knott’s Berry Farm fame. He turned it into a tourist attraction and then gifted it to the San Bernardino County who incorporated it into their parks system.

The Ghosts of Calico

There are several ghosts said to now reside in the Calico Ghost Town. Many visitors report seeing shadowy figures in the corners of their eyes, feeling tugging on their clothing and unexplained temperature drops. Some have felt touches on their faces and hands when no one else was nearby.

Three of the most famous Ghosts are as follows:

One of Calico Ghost Town’s most famous residents it Lucy Lane. Lucy and her husband John ran one of Calico’s general stores during the town’s boom period. Like many of the towns other residents the Lanes moved away when the town began to decline in order to make a living in another town.

The Lanes missed the town they had known and loved and returned there in 1916 after it had been long abandoned. The couple lived out the remainder of their days in the now quiet surrounds of the Calico Ghost Town.

It seems fitting that her spirit would choose to stay around in Calico after she was so dedicated to the town in her life. Many visitors to Calico have reported seeing Lucy’s spirit walking between the building that was once her home and the general store. She has also been spotted inside both buildings, behind the counter in the general store and even causing the rocking chair to rock back and forth on its own in her old home. She is said to be seen wearing the same beautiful black lace dress she was buried in.

Teachers and Students in the Calico Schoolhouse

Another prominent hotspot for paranormal activity in Calico Ghost Town is the old school house. There is no record of the teachers names but their spirits are frequently seen milling about in the schoolhouse.

Shadowy figures are often seen peering out of the windows of the schoolhouse as if supervising children playing. Visitors often report seeing a red ball of light flickering around inside the schoolhouse.

Some visitors have reported hearing the ghostly footsteps of children running around or playful whispering coming from empty rooms. It seems there is still plenty of activity in the school house if you stay quiet long enough to hear it.

Arguably Calico Ghost Towns most famous resident is Tumbleweed Harris. He was the last Marshal of Calico and it seems he wasn’t ready to retire even in death!

Tumbleweed is often seen walking along the boardwalks of Main Street recognized by his large frame and long white beard. His body is buried in the Calico cemetery where you can stop by and pay you respects. Some have reported feeling a ghostly hand on their shoulder while doing so.

Other Ghosts of Note

There are several other ghostly entities seen around town, including Dorsey, the mail-carrying dog, and an aggressive cowboy spirit said to haunt Hank’s Hotel. A female spirit dubbed Esmeralda is often seen wandering on the outskirts of town wearing a long white dress.

Some other places in Calico where various types of paranormal activity have been reported include Hank’s Hotel, the Calico Corral and Maggie Mine.

Some of the facilities at Calico Ghost Town Campground

If you want to stay the night and do some ghost hunting you can stay at the Calico Ghost Town Campground. There are rooms, cabins and camping sites available so you can have a comfortable base while you see if you can have your own encounter with Calico’s Ghost population.

Make sure you bring clothes for both hot and cold weather as Calico Ghost town is scorching hot during the day but can be very cold and night time.

If you enjoyed this article you may also like to learn about La Llorona or the infamously haunted Stanley Hotel.