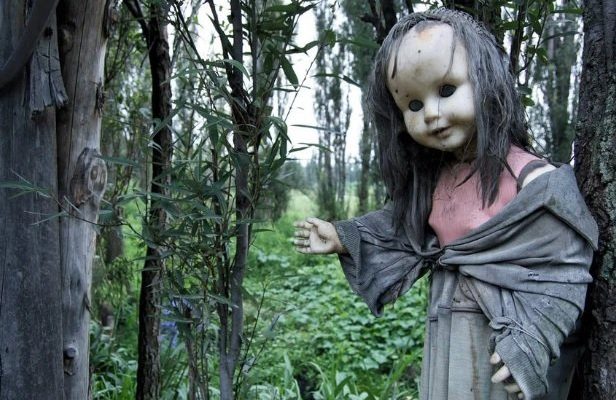 A creepy doll that looks a bit like a Tiyanak.
Eneas De Troya, CC BY 2.0, via Wikimedia Commons

Have you ever been out in the woods and heard the sound of a crying baby? It could have been a Tiyanak trying to lure you to your death.

What is a Tiyanak?

A Tiyanak is an evil spirit that takes the form of a newborn baby. It can be heard crying in the woods in rural areas in the Philippines.

If an unsuspecting victim goes to the child and picks it up the Tiyanak will revert to its true form and attack them.

There are several different versions of the Tiyanak according to people from different areas in the Philippines.

In one version of the legend the Tiyanak is a normal baby until approached when it reveals it has sharp claws and teeth. Sometimes the baby is seen flying through the forest as a normal baby before transforming into a large black bird.

In another version the Tiyanak is more like a dwarf being described as a tiny old man with wrinkly skin, long facial hair, a flat nose and beady eyes. This version of the Tiyanak has one leg much longer than the other and struggles to move quickly. This is why it uses the cry of a baby to draw in it’s prey.

Another version of the Tiyanak from Central Luzon describes them as small people who levitate. They have large noses, wide mouths and large eyes.

It is said that if the cry of a Tiyanak sounds soft and quiet then it is actually nearby. It the cry of the Tiyanak is loud then is is actually far away.

Some legends state that Tiyanaks are the spirits of normal babies who died without a name. They then move throughout the forest looking for someone to name them so they can move on to the afterlife.

When the Spaniards conquered the Philippines they morphed this legend to fit in to Catholicism claiming that it was unbaptized babies who became Tiyanak.

In modern times the Tiyanak are said to be the spirits of aborted fetuses seeking revenge on their parents.

Several people on Tik Tok claim to have encountered the Tiyanak in real life. Videos posted contain groups of people camping in the woods when they hear the sound of a baby crying.

How to Avoid a Tiyanak Attack

Rosemary and Garlic can be used to ward off the Tiyanak. Photo credit.

Filipino folklore provides us with a number of countermeasures for avoiding a Tiyanak attack.

If you find yourself lost in the woods lured in by the cry of a Tiyanak you can escape by turning your clothes inside out. This is said to amuse the Tiyanak so it will no longer want to harm you.

Loud noises such as celebrations are said to be enough to drive the Tiyanak away. Carrying rosemary and garlic is also said to be effective in warding off the Tiyanak.

You can bring peace to the spirit of the Tiyanak by giving it a name and offering a white candle to guide it to the afterlife.

If you enjoyed this article you may also enjoy learning about the black stick man cryptid or the Hidebehind.