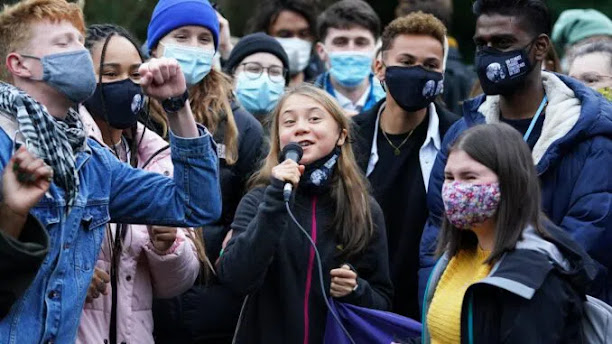 (Planet Today) Greta Thunberg seemed to enjoy being in the limelight as she accused world leaders and government officials of “pretending to take our future seriously”on Monday.

Thunberg, the 18-year-old Swedish climate activist told a gethering of protesters at a park near the COP26 venue in Glasgow:

“We say no more blah blah blah, no more exploitation of people and nature and the planet…

No more exploitation, no more blah blah blah. No more whatever the f**k they’re doing inside there.”

The Swedish activist’s latest polemic isn’t entirely unprecedented – she has built a massive following largely by challenging politicians to take more action to fight climate change – but her rhetoric is clearly amping up now that she’s an adult.

She famously chastised world leaders in her 2019 speech at the UN in New York, saying repeatedly, “How dare you!” She angrily told the audience, “We are in the beginning of a mass extinction, and all you can talk about is money and fairytales of eternal economic growth. How dare you!”

As Thunberg ranted in Glasgow about politicians only paying lip service to the “climate crisis,” the proceedings at COP26 did little to dispel her point. In fact, US President Joe Biden appeared to fall asleep during one of the opening speeches at the summit on Monday.