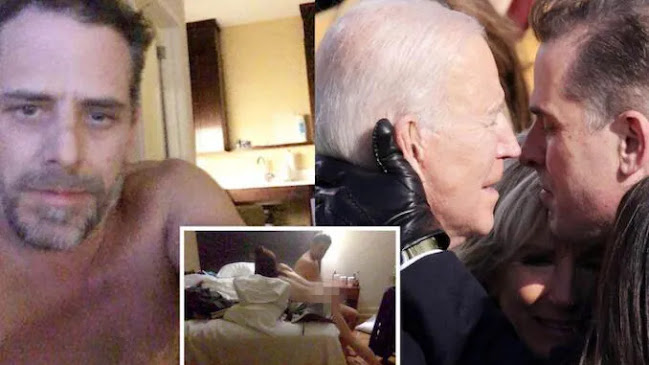 A newly leaked video shows Hunter Biden confessing that Russians stole another of his laptops that contain ‘sickening videos’ of him performing “f***ing crazy sex acts” on victims.

In the video, Hunter can be seen discussing the compromising material Russians have on him to a prostitute. He claims the incident occurred while he was close to overdosing on crack in a Las Vegas hotel room.

The incident means Hunter lost a total of three computers – the first abandoned at a Delaware computer store and the second seized by the FBI – each likely to hold incriminating and sensitive material on the Biden’s, including his father President Joe Biden.

“I spent f***ing crazy amounts of money,” Hunter told the unidentified prostitute. “I was with these guys. The one guy was, not like you anyway… each night he’d be like ‘there’s going to be so many people here, crazy f*cking party’ and each night it’s nobody.”

“So anyway, and they had kicked everybody out. And they had cleaned up the entire place and they were getting ready to leave, and I woke up,” Hunter continued. “And there was this Russian 35-year-old, really nice, pure brunette.”

“She refused to leave and they wouldn’t call an ambulance and they didn’t know whether I was dead or not at first,” Hunter said. “They checked to see if I was breathing. When I finally showed signs of breath. At first I wasn’t breathing. I was in the f*cking pool face down and they don’t know for how long.”

Hunter claimed someone stole his computer and “did all this kind of like pretend search and sh*t.”

“I think he’s the one that stole my computer. I think the three of them, the three guys that were like a little, like group. The dealer and his two guys, I took them everywhere, f*cking everywhere, crazy out of your mins sh*t.”

The hooker then asked Hunter what was on his stolen laptop as the two continued consuming drugs in bed.

“They have videos of me doing crazy f*cking sex f*cking, you know.” Hunter admitted, adding they would use it for blackmail because his father Joe was going to become President.

“My dad [inaudible] running for president,” he whispered. “He is. I talk about it all the time.”

‘I’m worried he gets the money up front and maybe it doesn’t do a million dollars, maybe it does three. Maybe nobody wants to see me naked,’ he said.

‘Maybe it’s ‘news interest’ and because my dad’s a public figure they say ‘we don’t have to pay you anything because you’re of interest in regular news.’

Photos on the laptop hard drive obtained by DailyMail.com include pictures of a woman’s Russian passport, and photos of Hunter topless pulling the woman’s brunette hair while she kneels on a bed.

Other photos show the woman and three young men driving to Hunter’s former Hollywood Hills rented home, drinking and partying by the pool, and two women naked with Hunter by the pool.

It is unclear whether the Russian woman and the three men are the same people Hunter accused of stealing his laptop.