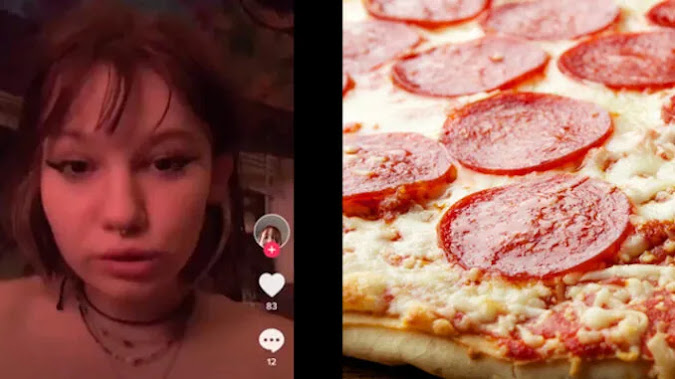 People should be free to use “neo-pronouns” to identify as a pizza, or a kitten, or anything they desire, declared a “woke” Biden supporter in a disturbing TikTok video.

In the bizarre video, a Democrat supporting “cis-gender” girl says she supports “neo-pronouns,” and that anyone can be a pizza, because of equality.

“As an ally I want to say this: I am totally down with neo-pronouns such as pizza, pizza-self, kitten, kitten-self…simply because, if you ask me to call you by ‘Pizza…Pizza-kitten-self,’ you know? Whatever…then I’m going to try my best to respect that because what else do I call you?”

Infowars.com reports: This type of strained logic, idiotically celebrated as “pushing the real-world boundaries,” is actually the product of “woke” progressive liberal indoctrination imposed at a very young age, which distorts the minds of young Americans by teaching them boys can be girls, girls can be boys and people can be pizza.

Related Topics:
Up Next

Miners of the Elga coal deposit (Yakut) in Siberia dug up a strange statue in the form of a woman with a sword and shield, and behind it there seem to be wings, like a fallen angel. The statue was unearthed by an excavator.

Miners show their emotions and enthusiasm when they are standing next to the statue. If the translation is right, they say that they cannot describe or tell what it is and that right now the special services will arrive by helicopter to pick up the statue to an unknown location.
Further study and examination by experts may be required to determine the significance of this potentially valuable ancient artifact, but since the special services are involved, it remains to be seen whether we will hear anything about it in the future.

Mankind has been waiting for the end of the world for a long time. The latest example is 2012. Many have stocked up on canned food and other necessities. But whether the Mayans were wrong or we misunderstood them, the world did not end. Nothing catastrophic on a global scale happened on December 21, 2012.

Is there anything to fear now? Are there prophecies that point to a specific date? And not dubious predictions from uneducated fraudsters, but from respected people – like the Mayans.

Every year we see the alleged predictions of Baba Vanga and Nostradamus. In most cases, the end of the world is always linked to them in one way or another. But seriously, we can hardly believe in any of them anymore.

Here’s another name that has been associated with doomsday predictions in recent decades – the famous scientist Isaac Newton. Based on information from his personal manuscripts, we know that he tried to calculate the exact year of the apocalypse – 2060. Here’s what we know.

The many interests of Isaac Newton

The fact that Isaac Newton indicated the date of Armageddon, experts learned at the end of 2002, when manuscripts with his notes were discovered.

They had been kept for many years in the National Library of Israel among the unorganized archives of the author of the First, Second and Third Laws and, of course, the Law of Universal Attraction.

After scientists discovered and read the previously unknown manuscripts of the genius, it turned out that in addition to mechanics, physics and mathematics, he also studied alchemy, occultism, astrology and theology.

After Newton’s death in 1727, thousands of pages dedicated to his “secret passions” were kept in a chest in the home of the Earl of Portsmouth for more than 200 years. In 1936, most of the manuscripts were purchased at auction by the Jewish scholar Abraham Yehuda.

As a result, they ended up in the National Library of Israel.

There is Newton’s manuscript with a prophecy about the end of the world in 2060. It was discovered by Harvard University Professor Stephen Snobelen, who began the initial research.

Newton’s previously inaccessible manuscripts testify to the fact that alchemy, theology and the occult came to the fore, and his serious discoveries were the result of this “obscurantism”.

For example, the law of universal attraction did not appear thanks to the famous apple, but thanks to the concept of the attraction of one element to another, which was proclaimed by alchemy. Another example is Newton’s famous physical theory of absolute space and time, which was based on the theological ideas of the genius of physics.

He believed that absolute space is the place inhabited by God, the form of existence of His universal spirit, and absolute time is the infinite duration of the divine presence.

In addition, Newton believed that due to the divine structure of the universe, any impact is immediately transmitted to each of its points without the participation of matter. Curiously, this theory is also considered by some modern physicists who study vacuum and quantum mechanisms.

Now let’s take a closer look at Newton’s actual predictions and the apocalypse.

Part of a 1704 letter to a friend in which Newton calculates the day of the Apocalypse using the Book of Daniel.

Newton treated the Bible with a special mystical reverence – he studied it all his life. He believed it contained messages from higher powers about the future of the world. He dreamed of creating a system that would allow the Bible to be used to predict that future.

There is another well-known source that also attracted the attention of a genius – the Book of Daniel (Old Testament), in which the prophet accurately predicted the date of Christ’s coming to earth, the death of the Son of God, and His resurrection.

Newton believed that God had chosen the prophet Daniel to interpret the future. And to “see” it, the book must be deciphered – every word of it. What Newton did for many years-nearly 50, since he also considered himself chosen by God-to try to decipher it.

Mathematically calculating the date of the end of the world, he wrote 4,500 pages of words and formulas. The Book of Daniel itself is a collection of prophecies.

Newton interpreted them in an attempt to create an algorithm suitable for predicting future events. What happened in the end remains to be seen – the archive has not been fully studied. Only the mysterious date of the end of the world, 2060, was discovered.

After understanding the essence of Newton’s manuscripts, Professor Snobelen discovered that the scientist had deciphered the Bible’s references to certain periods of time. Newton defined one of these periods as 1260 years. He then calculated that this period began in 800 AD.

He added 1260 years and came up with 2060. Newton himself wrote that a world war would begin, then there would be a plague that would lead to the destruction of a significant portion of humanity. But after the end of the tribulation, the kingdom of the Messiah will come, and the world will see a new beginning.

In other words, it should be noted that when the prophet prophesied the end of the world, he still believed that after a time of trouble for mankind, an era of prosperity would come when God would live among people to dry their tears of suffering.