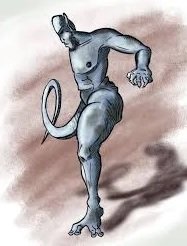 A drawing of a Nasnas. Photo: New Cryptozoology.

The Nasnas is a creature from Arabic mythology that is said to be made up of half of a human body having one arm, one leg, half a torso and half a head.

The Nasnas is a mythical creature from Arab folklore, often described as a half-man. The creature is often depicted as having one eye and one leg, but it is able to move quickly and agilely despite this apparent physical disadvantage.

Some tales depict Nasnas as a shapeshifter, able to change its appearance at will, but in most legends it is a single-eyed, one-legged creature. It is also said to have supernatural powers, such as the ability to become invisible or to control the minds of its victims. The Nasnas is thought to be the source of many unexplained disappearances and deaths in the desert.

In Arabian folklore, there are many stories and legends about encounters with the Nasnas. One such story tells of a Nasnas who could shape-shift into a handsome young man and seduce human women. Another tells of a Nasnas who was able to steal the milk from a woman’s breast while she was nursing her child.

In some stories, the Nasnas is said to have the power of invisibility, making it difficult to catch or spot. In other stories, it is said to be able to take on the form of a different animal or even a tree or rock.

There are also tales of people who have been able to capture the Nasnas by tricking it or by using its own powers against it. Some stories say that if you can catch a Nasnas, you will be able to ask it three questions and it must answer truthfully.

Origin of the Nasnas legend

It is not clear exactly where the legend of the Nasnas came from, but some historians and folklorists believe that it may have originated from pre-Islamic Arabian beliefs. The Nasnas is often associated with other mythical creatures from Arabian folklore such as the jinn, which are supernatural spirits that are believed to inhabit the Earth.

Some scholars propose that the Nasnas might be a representation of the marginalized and outcast members of society.

Others suggest that the Nasnas might be a symbolic representation of the fears and anxieties of the ancient Arab people, such as the fear of the unknown or the fear of being deceived by someone who appears to be trustworthy.

It’s also possible that the Nasnas legend may have developed as a way to explain unusual or mysterious occurrences in the natural world, such as strange animal behavior or unexplained disappearances.

A video talking about the Nasnas

Have you ever had an encounter with the Nasnas or other Jinn? Let us know in the comments.

If you enjoyed this article you might also be interested in bakeneko: supernatural house cats or the Vietnamese Batutut.