The J’ba Fofi is a 4ft long spider cryptid spotted in the jungles of the Congo. Missionary Arthur John Simes was reportedly killed by one in 1891.

The J’ba Fofi is described as a huge spider about the size of a dog.

J’ba Fofi eggs are a pale yellow color and are shaped like peanuts. Hatchlings are a bright yellow color with a purple spot on their abdomen. As the J’ba Fofi mature they are said to turn a darker brown color.

The local people of the Congo claim the J’ba Fofi used to be quite common but have become rarer in recent years.

J’ba Fofi are said to behave in a similar way to a trapdoor spider. They Dig shallow tunnels under tree roots and camouflage them with leaves. They then create a string of webbing between the trap and their burrow, creating a network of trip lines.

The spider’s victim obliviously will trigger the trip lines and alert the J’ba Fofi. The spider will then emerge and chase the spider deeper into the web until it can’t escape.

A recreation of a J’ba Fofi attacking a woman. Photo: Quora.

The first J’ba Fofi encounter by a western explorer was by British missionary Arthur John Simes in 1891.

Simes claimed he and his men became tangled in a giant spiderweb while travelling through the jungle in the Congo. Almost immediately two giant spiders, one two feet in length and another four feet long, emerged from underground and attacked.

Simes was bitten by one of the J’ba Fofi but managed to shoot it with his pistol and escape.

He went on to develop severe chills and swelling around the bite. He eventually became delirious before falling unconscious and dying.

Another startling account comes from a book by George Eberhart called “Mysterious Creatures – A Guide to Cryptozoology”. On page 204 of the book Eberhart tells the tale of an English couple travelling through the Congo.

As they were driving, the couple saw a large animal cross the road in front of them. At first they thought it might be a monkey or a cat. To their horror, as they got closer they saw the creature to be a humongous spider about three feet in length.

Assuming the stories aren’t all made up what else could be going on with the J’ba Fofi?

The biggest spider in Africa is the baboon spider (Theraphosa spp). These spiders are native to sub-Saharan Africa and can have a leg span of up to 11 inches (28 cm) and a body length of up to 4 inches (10 cm).

Baboon spiders are non-venomous and primarily feed on insects, but can also eat small lizards, frogs, and even small mammals. They are known for their large size, dark brown color and hairy appearance.

It is possible that people have encountered these spiders in the wild and then wildly overestimated their size in their retellings of the stories, creating the legend of the J’ba Fofi.

Perhaps there is in fact a huge species of spider that exists in the untouched jungle of the Congo that hasn’t yet be categorized by science.

There are a number of factors that limit the size to which a spider can grow however.

Oxygen availability: Spiders need oxygen to survive, and larger spiders have a harder time getting enough oxygen to their bodies to support their larger size.

Energy requirements: Larger spiders require more energy to move and maintain their bodies, and they also need to consume more food to meet these energy needs.

Structural limitations: Spiders have an exoskeleton, which means that they can only grow so large before their exoskeleton becomes too heavy for their muscles to move.

Reproduction: Larger spiders also have a harder time reproducing, as they need to produce more eggs or sperm, which can be energetically costly.

Temperature and humidity: Spiders are ectotherms and their body temperature is regulated by the environment. Spiders are cold-blooded animals that require a warm and humid environment to survive. too much heat or dryness can cause them to dehydrate and die.

Ecological niche: Competition for food and habitat can limit the size of a spider. Larger spiders may have a harder time finding enough food or suitable habitat to survive.

Evolution: In general, spiders have evolved to be the size that is most advantageous for their survival and reproduction in their particular ecological niche.

Perhaps the Congo provides the perfect niche for these giant spiders to exist in.

Would you like to venture to the Congo to try and find a J’ba Fofi? Let us know in the comments.

If you enjoyed this article you might also be interested in the legend of Ukraine’s giant spider or another African cryptid: the Tokoloshe. 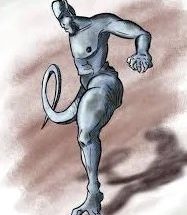