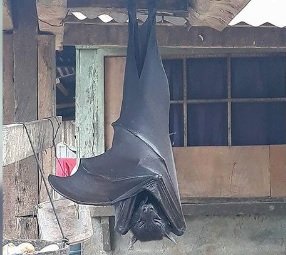 The Ahool is a giant bat sometimes spotted in Indonesia. It is even bigger than the one pictured here. Photo: sciencealert.com.

The Ahool is a huge bat-like creature with a 12ft wingspan that has been spotted in the rainforests of Indonesia.

The Ahool is a cryptid that is said to live in the rainforests of Indonesia. It is described as a large bat-like creature with a wingspan of up to 12 feet and a fur-covered body. Some reports claim that the Ahool has a monkey-like face and glowing red eyes.

The creature is said to be very aggressive and to make a loud, distinctive cry that sounds like “ahool.” The Ahool lives in caves near rivers and is said to be a powerful flier that can fly at high speeds and carry prey in its claws. There are reports of the Ahool preying on livestock and even attacking humans.

There have been relatively few alleged sightings of the Ahool, and most of the reports are from the early 20th century.

The first known report of the Ahool was made by explorer and naturalist Ivan T. Sanderson in the 1920s. He claimed to have heard the creature’s distinctive cry while on a trip to Java, Indonesia. He also claimed to have seen the creature briefly, describing it as a large, bat-like animal with a monkey-like face and bright red eyes.

In the 1930s, another explorer and naturalist, Bernard Heuvelmans, reported hearing the Ahool’s cry while on a trip to Java. He also claimed to have seen the creature briefly, describing it as a large bat with a wingspan of up to 12 feet.

In the 1970s, a British cryptozoologist named Jonathan Whitcomb claimed to have seen the Ahool while on a trip to Indonesia. He described it as a huge bat creature with a wingspan of about 12 feet and a light brown, fur-covered body.

Possible Explanations for the Ahool

A video explaining the Ahool

Some experts believe that the ahool my just be misidentified sightings of the golden-crowned flying fox.

The giant golden-crowned flying fox is a species of bat that is native to Indonesia and other parts of Southeast Asia. It has a wingspan of up to 6 feet, which is smaller than the 12 feet wingspan reported for the Ahool, but still significant. The bat also has a monkey-like face and large, bright eyes. Additionally, the giant golden-crowned flying fox is known to make loud vocalizations, which could be mistaken for the Ahool’s reported cry.

Moreover, the Giant Golden-crowned Flying Fox is known to fly over rivers and caves, habitats that are also reported for the Ahool. It is also known to fly at night which is also the time when Ahool is reported to be active.

It’s important to note that while the Giant Golden-crowned Flying Fox is a known species, it is also considered a vulnerable species and its population is decreasing. Due to its large size and rarity it may be mistaken for an unknown creature.

Do you think the ahool is simply an extra large flying fox or something more mysterious? Let us know in the comments!