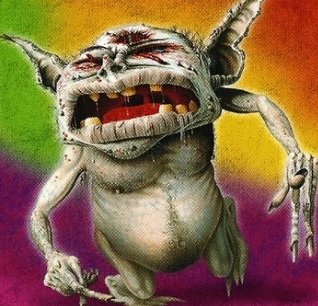 An artist’s depiction of the Tikoloshe. Image: Superpower Wiki.

The tikoloshe is a creature from South African folklore that is believed to be a mischievous and evil spirit. It is said to be a small, hairy creature that can shape shift into various forms, including a dwarf or a ball of fire.

The Legend of the Tikoloshe

According to legend, the tikoloshe is summoned by a witch doctor or sorcerer, and can be used to cause harm to individuals or communities. It is said to be able to make people sick, cause accidents, or even kill.

The tikoloshe is also believed to be able to possess people, causing them to behave erratically or commit violent acts. Some stories even claim that the tikoloshe can take on the form of a loved one, in order to manipulate and deceive its victims.

To protect against the tikoloshe, people in South Africa often take precautions such as leaving out offerings of food or leaving a broom upside down near the entrance of their home. Some also believe that certain rituals or spells can be used to ward off the creature.

Despite its fearsome reputation, there are also stories of the tikoloshe being used for good. In some cases, it is said to have been summoned by those seeking justice or revenge against an oppressor.

In recent years, the tikoloshe has become a popular subject in South African literature and film. It is often used as a metaphor for the political and social issues facing the country, such as poverty, crime, and corruption.

Tikoloshe are described in many different ways since they are able to shapeshift into different forms at will. The most commonly reported description of a Tikoloshe is that of a small gremlin. They have a wrinkled, bony grey body with long fingers. They are about the size of a toddler which allow them to quickly move around people’s homes silently and without being seen.

Often a Tikoloshe will have a hole in the side of it’s skull which appears to have been made by a fire poker or small rod. This is an injury that occurs during the process of summoning them.

A somewhat humorous aspect of Tikoloshe anatomy is that they tend to have an extremely large penis relative to the size of the rest of their body.

Origins of the Tikoloshe Legend

The origins of the tikoloshe are not entirely clear, but it is likely that the belief in the creature has its roots in traditional African religion and has been influenced by Christian and European beliefs over time.

The belief in the tikoloshe is still prevalent in many parts of South Africa, particularly in rural areas and among the Zulu and Xhosa peoples. However, it is worth noting that the creature is not limited to South Africa and has variations in other African countries, like Zimbabwe, Botswana, and Namibia, where it is known as Tokoloshe, or in the Caribbean, where it is known as Duende or Duendes.

A video recounting the legend of the Tikoloshe

Have you ever seen a Tikoloshe? Let us know in the comments!

If you enjoyed learning about the Tikoloshe you may also be interested in some other lesser known cryptids or the similar Jumbees of Caribbean origin.