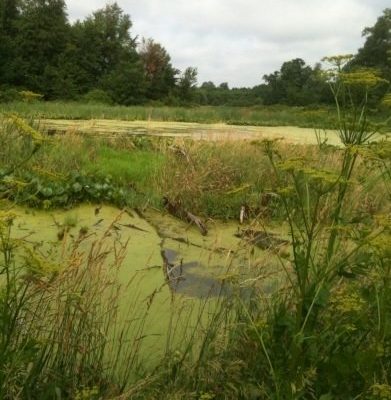 Fulk Lake – Where the Beast of Busco was initially sighted. Photo: Cryptomundo

The Beast of Busco was a huge snapping turtle that has been seen several times over the years near the town of Churubusco, Indiana.

According to local legends, the beast of Busco was first spotted in the summer of 1891 by a farmer named Oscar Fulk. He claims he saw a giant turtle, the size of a dining room table, living in the seven-acre lake on his farm near Churubusco. He told his friends and neighbors about the beast but ultimately decided to leave it alone.

Word of the creature quickly spread throughout the small town, and many people began to claim that they had seen the beast of Busco as well.

Fifty years later, in the summer of 1948, Ora Blue and Charley Wilson, citizens of Churubusco, also reported seeing a huge snapping turtle on the very same lake. They estimated that the creature weighed about 500 pounds.

Blue and Wilson reported what they saw to Gale Harris, the farmer who owned the land. Harris told them he had also seen a huge snapping turtle while out fishing on the lake.

Word spread around Churubusco and locals flocked to the lake to try and see the beast of Busco for themselves. Attempts were made to drive the beast out of the lake by motorboting on it and even attempting to drain it but none were successful.

Over the years, the sightings of the Beast of Busco have become less frequent, and the legend has largely been forgotten outside of Churubusco. However, some people in the town still believe that the creature exists and that it may still be lurking in the area around Fulk Lake.

Fulk lake is located on private property and the current owners are not accommodating of adventurers looking to see the Beast of Busco for themselves.

The concrete statue of Oscar the Beast of Busco on Churubusco’s main street. Photo: Cryptomundo

The town of Churubusco has adopted the Beast of Busco as a mascot. There is a statue of it standing proudly on the sidewalk at the main intersection in Churubusco. The locals have affectionally dubbed the beast “Oscar” and hold a festival in his honor every year in June. They have even given themselves the title of “Turtle Town USA” in celebration of the Beast of Busco.

Was the Beast of Busco Just a Big Snapping Turtle?

It’s possible that the locals of Churubusco saw an unusually large snapping turtle. Alligator snapping turtles are relatively common in Indiana, especially in the northern areas of the state.

Alligator Snappers usually grow up to about 26 inches in shell length and weight about 175 pounds. The Beast of Busco could possibly have been a very old snapping turtle who grew to an enormous size and found a nice home for himself in Fulk Lake.

It is however very unusual for Alligator Snapping Turtles to live so close to humans near urban developments.

Have you ever ventured to Churubusco to see Oscar the Beast of Busco? Let us know in the comments!

If you enjoyed learning about the Beast of Bosco you may also be interested in other small town cryptids like the Loveland Frogman or Ukraine’s Mutant Spider.