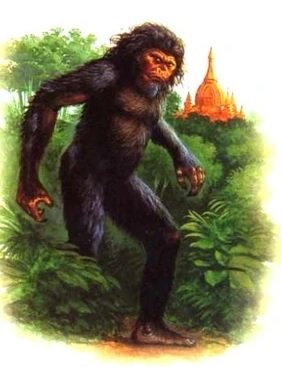 An artist’s impression of a Batutut. Image: Cryptid Wiki

Batututs are humanoid ape-like creatures spotted by both the Viet Cong and the Americans during the Vietnam War. Sightings were so frequent in one area that it became known as Monkey Mountain.

Batututs are described as large monkeys that walk upright on two legs. They stand about 6 feet tall and have a strong, muscular build.

Batututs are covered in mid-length, reddish-brown fur. This hair covers their entire bodies apart from their knees and the soles of their feet.

They have incredibly long arms that stretch down towards their knees and stomachs that protrude outwards like the beer belly of a middle-aged man.

Batutut were often sighted deep within the jungle of Vietnam where people rarely ventured. They live in groups of ten to twenty as opposed to the American bigfoot who prefer a more solitary lifestyle.

Batutut seem to have little fear of humans. This could be due to a lack of exposure since they lived in locations rarely explored by humans. It could also be due to their impressive physique; the humans they encountered were simply too small to be a threat.

Batutut were occasionally spotted by villagers before the Vietnam war. When out deep in the jungle, villagers sometimes reported batutut emerging from the foliage and quietly coming to sit with them. They called them “the forest people” and believed them to be a peaceful presence.

After interacting with American soldiers the Batutut became more aggressive. They began to throw rocks at nearby humans and even return grenades thrown at them. Sometimes they were seen to shake their fists in anger at troops in an uncanny human-like way.

Some stories of Batutut encounters tell of American soldiers acting aggressively towards them, only to be torn limb from limb by the beasts. It seems Batutut value politeness. If you are kind to them they will be kind to you. If you are rude to them you will pay with blood.

Sightings of Batutut were so common among Viet Cong troops that General Hoang Minh Tha ordered an expedition to try and capture one in 1974. The expedition turned out to be unsuccessful and no Batutut were found.

Undeterred by this failure, Professor Vo Quy of the Vietnam National University led another expedition to find the Batutut but was also unsuccessful.

Some suggest that sightings of Batutut are simply misidentified sightings of orangutans. Orangutans did once live in the jungles of Vietnam, but have been extinct there for thousands of years. Perhaps a small troop of these orangutans managed to survive in the remote areas of the jungle and evolved to become their own subspecies over the years.

Another possibility is that the Batutut were simply hallucinations by the soldiers due to the extreme stress of their living conditions. Perhaps one soldier hallucinated the creatures and the story took on a life of it’s own, becoming embellished with every retelling. This however wouldn’t explain why soldiers on both sides of the conflict reported seeing the Batutut.

A video telling the story of the Rock Apes or Batutut.

Do you think there are still Batutut roaming the jungles of Vietnam? Let us know in the comments.

If you enjoyed reading this article you may also be interested in a story of a Bigfoot being hit by a train back in America or the town that was abandoned due to recurring Bigfoot attacks.