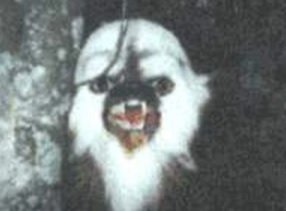 An alleged photo of an Abbagoochie. Photo: wboy.com.

The Abbagoochie is a small creature with the eyes of an owl, body of a fox and legs of a deer. It is said to be able devour animals on land the way a piranha devours animals underwater.

Abbagoochies are small, ferocious creatures. They grow to about 3 feet in length and weight less than 40 pounds. They are said to have the eyes and feathers of a tawny owl, have the body of a fox and have deer-like legs.

They are similar in stature to a medium sized dog.

The Abbagoochie has been dubbed the “dry land piranha” due to it’s ferocious nature. Abbagoochies will attack anyone or anything that comes across their path with little regard for their own safety.

The Abbagoochie has an insatiable hunger and will eat several times it’s own body weight in food each day.

Abbagoochies are said to be able to consume even their own bodies when threatened. When cornered the Abbagoochie will contort and twist upon itself until it suddenly disappears from sight.

Where to Find an Abbagoochie

The Abbagoochie is native to Costa Rica but has allegedly found itself in West Virginia in recent years.

Jim Wilson of the Webster Echo reported that 13 baby Abbagoochies were released into the wild in West Virginia to help local pest problems. He claimed the population had quickly gotten out of control and the creatures were now attacking people and livestock.

It turns out that Jim Wilson’s account was a hoax. Strangely, even after the hoax was made public knowledge, people still reported sightings of the Abbagoochies in the wild in West Virginia.

A writer online claiming to be Jim Wilson’s son said that his dad was made to retract his story due to public panic and it was all true.

A video telling the tale of the Abbagoochie

Do you think the Abbagoochie is a real creature or just a creative hoax? Let us know in the comments.

If you enjoyed this article you may also be interested in the abath: an Indonesian Unicorn or the Abatwa, fairy people of South Africa.