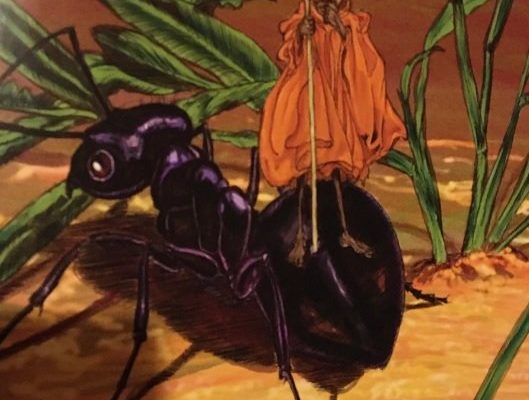 Abatwa are tiny humanoid creatures from Zulu folklore. These creatures are generally peaceful and live in anthill-like dwellings. Be careful not to offend the Abatwa as they can turn violent.

In the Zulu folklore of South Africa, Abatwa are tiny humanoids resembling fairies.

Abatwa are described as being so small that they can hide behind a blade of grass or ride an ant like a horse.

Abatwa live underground in dwellings that look just like an ant hill at first glance. Sometimes Abatwa are said to roam throughout the mountains of Africa, taking shelter in ant hills as they roam. Abatwa are said to adorn the walls of their dwellings with mosaics made from different colored seeds.

According to legend only children, wizards or pregnant women are able to see the Abatwa. If a pregnant woman sees a male Abatwa, it is said she will have a boy child. Likewise if she sees a female Abatwa it means her child will be a girl.

The Abatwa are generally helpful and friendly. They are happy to provide aid and advice to anyone they encounter.

In spite of their general good nature the Abatwa are very easily offended. They especially dislike being told they are small and will even attack people who make fun of them for their size.

To avoid accidentally offending the Abatwa, the Zulu people greet them by saying “I saw you”. This implies that the creatures are large enough to be seen and therefore not small.

Abatwa are said to attack with incredibly potent poison arrows that are capable of taking down a full sized man with ease.

The Abatwa use their potent poison arrows to hunt large animals. When they’ve secured their kill they will devour it, leaving no sign of the carcass behind.

If an area becomes depleted of animals to hunt, the Abatwa gather the whole tribe together on the back of a single horse. They stand single file on the horse’s back and scour the area for prey. If they can’t find any they will kill and eat the horse.

Origins of the Abatwa Legend

A photo of some women from the Great Lakes Twa tribe, or Abatwa, with their pottery. Photo: Wikimedia Commons.

In Zulu culture the term Abatwa is used not only to describe a group of fairy-like creatures but also to describe a neighboring pygmy tribe.

The Abatwa people, also known as the Great Lakes Twa, are small in stature with an average height of just 4 feet. They are known for their great skill in making pottery.

It is possible that the legend of the Abatwa arose after several generations of retelling stories of interactions with the Great Lakes Twa people.

A video about the Abatwa cryptid

Have you even seen an Abatwa? Let us know in the comments.

If you enjoyed this article you may also be interested in the Abath: Indonesia’s Unicorn Cryptid  or another South African cryptid: the Grootslang.