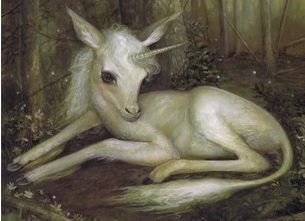 One artist’s interpretation of an Abath. Image: Cryptid Wiki.

Abath is the name given to a unicorn cryptid in Indonesia. It is described as a large being that stands on four legs and has a large grey-brown horn in the center of it’s forehead.

James Lancaster and the Abath Horns

An artist’s depiction of an Abath. Image: Grimm Wiki

European privateer, James Lancaster, was venturing through the Kingdom of Iunsalaom in the late 1500s (now Phuket Island, Thailand) when he came upon some horns of Abath for sale. When he inquired as to what creature these horns came from, he was told that the Abath was a type of female unicorn.

The locals described the Abath as a large beast that walked on all fours. It was grey-brown in colour and had a mane of rough, bristly hair. In the center of its forehead grew a spectacular horn. This horn was prized as an antidote for many poisons.

Lancaster purchased a number of these Abath horns and took them back to sell in his homeland.

Historians believe the Abath is probably just a Sumatran or Javan rhinoceros. These animals are called “la bada” by Portugese travelers and this word is similar sounding to Abath.

Marco Polo reported seeing a number of unicorns while traveling through the Kingdom of Basma. He claimed these unicorns were very different to the unicorns from European stories. Instead of being delicate, horse-like creatures these Indonesian unicorns were “ugly, mud-wallowing brutes”.

The following excerpt appeared in the Grimm Diaries from the tv show Grimm:

The horn of the Abath is his primary weapon and is used to impale small children, which it then eats. Much like the tusk of an elephant or horn of a Rhino, it appears to be part of the skull.

I highly suspect that the Abath can see in the dark. His movements are primarily nocturnal and deep within the forest where the sun barely reaches, even in the daylight.

The nose of the Abath is elongated like that of a horse, with large nostrils and overlapping upper lip.

I observed the Abath stalking the perimeter of the forest beyond the village walls, his light-colored flesh caught the light of the moon like a piece of shiny metal. Suddenly, he darted out from the tree line and disappeared into the village. Moments later he returned carrying the body of a child, retreating back into the woods. I armed myself and followed him into a clearing. I found him feeding on the remains of the child.

A video describing the Abath from Malaysian culture

Do you think that the Abath is it’s own creature or just a misidentified Rhino? Let us know in the comments.

If you enjoyed this article you may also be interested in the terrifying Giant of Kandahar or the South African grootslang.