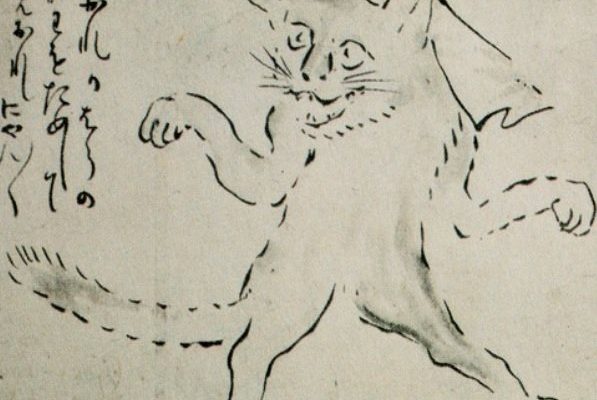 Is that a house cat or a Bakeneko?

Have you ever seen a house cat behaving strangely, in an almost supernatural way? You may have encountered a Bakeneko.

A drawing of a Bakeneko by Yosa Buson

Bakeneko are yokai from Japanese mythology. They appear to be normal house cats at a glance but have many supernatural abilities.

Bakeneko are said to have fur that sparks with electricity. The irises in their eyes change shape depending on the time of day. They move silently with extreme agility and grace. Bakeneko have fierce claws and teeth. They often have unusually long tails.

There are various supernatural behaviors exhibited by bakeneko. Some are able to speak with human words. Others can shapeshift into human form, often wearing a towel on their head and dancing. Some transform into the likeness of people who have passed away and haunt their loved ones.

According to legend sometimes bakeneko possess humans or attack travelers in the mountainous regions of Japan.

Bakeneko are said to enjoy drinking the oil from lamps and will often steal them from unwitting locals.

A video telling the story of the Bakeneko

One of the most famous tales of a bakeneko is about a man named Takasu Genbei. Takasu had a pet cat who he dearly loved. One day his beloved cat went missing.

At the same time his mother began acting strangely. She avoided the company of family and friends and would take her meals to eat alone in her room.

Eventually the family became concerned and peeked into the mother’s room. They saw a cat-like monster wearing their mother’s clothes and chewing on animal carcasses.

Takasu killed the creature and after a day passed the body turned back into that of Takasu’s pet cat.

The family then ripped up the floorboards of the home and found their mother’s body. It was just a skeleton covered in bite marks where the flesh had been gnawed from the bone.

Another famous bakeneko story took place in the time of Nabeshima Mitsushige. Mitsushige’s servant Ryūzōji Matashichirō displeased him and he was put to death.

Ryūzōji’s mother was distraught and told everything that had happened to her cat before killing herself in front of it. The cat licked the woman’s blood and became a bakeneko. The bakeneko tormented Mitsushige as revenge for the death of it’s family. Eventually Mitsushige got one of his servants to kill the bakeneko and he was freed from the curse.

Have you ever seen a Bakeneko? Let us know in the comments.

If you enjoyed this article you ay also be interested in the story of Resurrection Mary or black cat folklore.