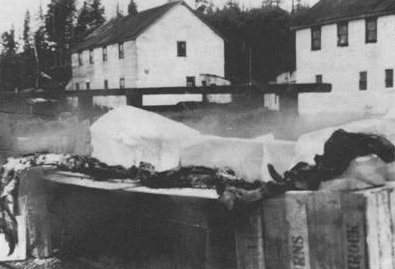 An artist’s depiction of the Cadborosaurus compared to a human diver. Photo: CryptidWiki

Over the past 200 years there have been more than 300 sightings of a giant sea serpent off the West Coast of America and Canada.

The Cadborosaurus, affectionately known as Caddy, is described as a huge 40-70 foot long sea serpent. It has a horse-like head and a long neck with small humps protruding from it’s spine. It has a small pair of front flippers either a large pair of hind flippers or a large fan-like tail.

The Cadborosaurus has been recognized by the Inuit people of Alaska and is known as hiyitl’iik, t’chain-ko or numkse lee kwala.

Caddy got it’s name as Cadborosaurus from its first sightings in British Columbia’s Cadboro Bay.

There have been over 300 Caddy sightings ranging from California to British Columbia.

The most convincing sighting of the Cadborosaurus was captured on video by Kelly Nash. You can watch it below.

Kelly Nash’s video of Caddy from 2009

Two men claimed to have captured a baby Cadborosaurus: one in 1968 and one in 1991. Both men say they returned the creature to the water shortly after finding it.

“We were headin’ North, and, about thirty miles offshore, and saw this thing standing about four feet out of the water. So, I headed over towards it and took a look at it. At first, I thought it looked like a polar bear with its ruffles of hair. When we got right up alongside of it-and the water was crystal clear-there was just this column of this thing going at least forty feet and huge eyes. I had an old Newfoundlander as a mate and he said ‘Do you see eyes on him?’ Mouth and nose I have no recollection of at all, just those great big eyes. And the eyes seemed to open from top to bottom.“

An alleged Cadborosaurus carcass found inside a sperm whale in October 1937. Photo: CryptidWiki

There have been several reports of Cadborosaurus corpses washing up on the pacific coast. Many were eventually discovered to be misidentified seals or oarfish but some couldn’t be identified.

The most boring explanation, as often with cryptids, is that Caddy is simply a collection of sightings of other creatures that have been misidentified. Scientists have suggested basking sharks, oarfish or sea lions as potential culprits.

A more interesting possibility is that the Cadborosaurus is a dinosaur that has somehow survived and managed to avoid proper capture and identification. Descriptions of Caddy seem to be fairly well in line with the Basilosaurus or the Plesiosaur.

Have you ever had an encounter with the Cadborosaurus? Let us know in the comments.

If you enjoyed this article you may also enjoy learning about the Palmyra Wolves or Tahoe Tessie.