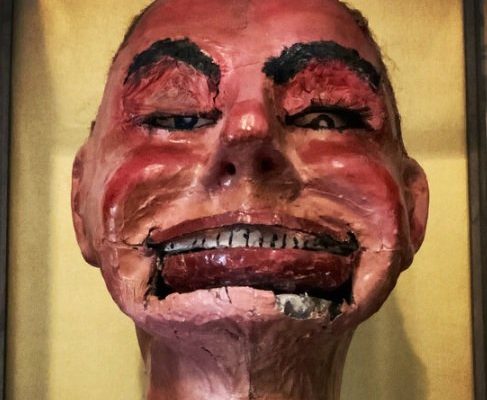 Mr. Fritz is a ventriloquist dummy that was used to entertain allied POWs during World War II. In more recent years Mr. Fritz has been kept in a museum where paranormal activity surrounding the doll has been captured on video.

The History of the Mr. Fritz Doll

Mr. Fritz: The ventriloquist dummy created by Billy Booth during his time in a POW camp in 1943. Photo: Dan Baines

Mr. Fritz was created by Private ‘Billy’ Booth, an allied prisoner of war, in the Stalag IIB camp between 1943 and 1945.

Life in the Stalag II-B camp was harsh. Prisoners who had been captured during the war were fed meagre rations and forced to work long hours on neighboring farms. If they didn’t work hard enough they were tortured or even killed.

The prisoners tried to distract themselves from their horrific living conditions by coming up with plays, musicals and jokes. Private Billy Booth was a children’s entertainer before the war and decided to use his skills to try and boost morale among the prisoners.

Billy lovingly created Mr. Fritz from newspapers soaked in potato starch and a pottle of pink paint donated to him by a Polish farmer.

For 18 months Billy and Mr Fritz entertained prisoners and guards alike at Stalag IIB. Tragically, just two weeks before the camp was to be liberated by allied forces, Billy and nine other POWs were taken into a field, made to dig their own graves and then shot.

After the ward Mr Fritz was gifted to Billy’s family back in the US as a symbol of their son’s strength of character and commitment to entertaining his fellow prisoners.

It is unknown exactly what happened to Mr. Fritz after the war but he eventually ended up in an antiques mall in Myrtle Beach, USA. An anonymous antiques dealer fell in love with the doll and felt compelled to bring it back with him to the UK.

After several nights of this the dealer began to notice other strange behavior from Mr. Fritz. The doll’s eyes would sometimes open and close on their own. Sometimes the doll’s mouth wold be found wide open or tightly closed.

The dealer tried to rule out causes of this activity such a mouse infestation or changes in humidity but couldn’t find a convincing answer.

The dealer even went as far as taping the display case shut. The next morning he returned to find the tape had been rolled back and the case opened once again. Unnerved, he placed Mr. Fritz in a shed in his garden.

While Mr. Fritz was in the garden shed the dealer’s children complained that they could hear laughing and crying sounds coming from inside. The dealer’s family were all too scared to go inside.

The dealer couldn’t keep Mr. Fritz any longer and sold him to entertainer Michael Diamond who placed the doll in his “freak room”.

Michael found the door to the display case began to open on its own every evening. One night he noticed the case had not only opened but had moved six inches across the table it was placed on.

After this Michael set up a gopro and managed to capture this footage over two nights in 2019.

Footage captured of Mr Fritz, the haunted ventriloquist doll, moving on it’s own.

Do you think Mr. Fritz is possessed by the spirit of Billy Booth? Let us know in the comments.

If you enjoyed this article you may also enjoy learning about Okiku: the doll that grows human hair or the MV Joyita.