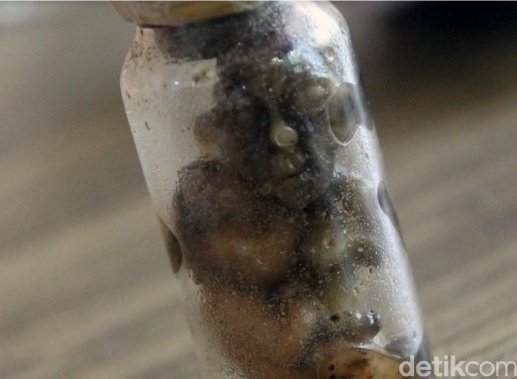 A Toyol created by a Malaysian Shaman. This one is a figurine, not an actual fetus. Photo: detik.com

A Toyol, in South-East Asian folklore, is believed to be the spirit of a baby or infant who has not been properly put to rest.

The Legend of the Toyol

A Toyol is a wandering infant spirit who does the bidding of a human master. According to legend people, usually witch doctors, are able to create a Toyol by using black magic on a dead human fetus.

A Toyol is described as being green in color and having large, sharp teeth. According to some they resemble goblins or leprechauns. Toyol have blood red eyes which are able to see through walls.

Once the Toyol has been created it will blindly follow the will of it’s master. The Toyol needs to be cared for by it’s master as if it were a real child. In order to remain in control of the Toyol it’s master must feed it sweet candy or a glass of milk every day.

On their own Toyol are quite friendly and playful but are easily manipulated. Nefarious characters may create a Toyol in order to steal on their behalf. After leaving the scene of their burglary, the Toyol may have left behind child sized foot prints and handprints.

When the master has decided they have finished with the Toyol they can be rid of it by giving the fetus a proper burial or disposing of it at sea.

You can ward off a Toyol by placing needles under your money. The Toyol are scared of sharp objects and will avoid taking your money out of a fear of being pricked.

Toyol are also easily distracted. You can prevent them from stealing from you by hanging garlic strands, marbles or beads in your home. The Toyol will have so much fun playing with these that it will forget why it came to your home and eventually leave without stealing anything.

Toyol are said to be afraid of their own reflection so they can be deterred by having lots of mirrors in your home.

According to legend if your ancestors have created a Toyol and not disposed of it properly you may inherit it to do your bidding.

A video detailing the legend of the Toyol

In 2021 in several villages in Kubang Kerian, Kelantan in Malaysia there were several reports of money being stolen by a Toyol.

Approximately 20 families reported money inexplicably going missing. There were no signs of forced entry in their homes. They all insisted that their cash had been kept securely.

“I withdrew RM1,000 from the ATM to be given to my parents. The following day, when I wanted to hand them the money, I was shocked to find that I was left with only RM500 in the bag instead.”

The were several other stories just like these that all came out within a couple of days.

A bottle containing a Toyol fetus was found in Kuala Pahang, Pekan, Malaysia in 2012. The bottle contained a black figurine that was about 15 centimeters high and about the size and shape or a human fist.

The figurine had a greenish tint and blood-red eyes. The bottle it was in also contained sand, yellow string and slices of onion. The Toyol is now on display at the Pahang state museum.

Have you ever encountered a Toyol? Let us know in the comments.

If you enjoyed this article you may also be interested in the Tiyanak or the Sigbin.