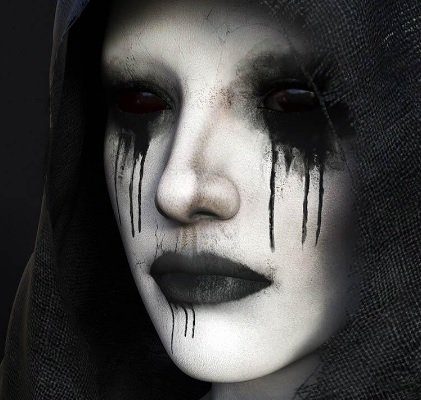 La Mala Hora is a spirit from New Mexican folklore that is said to appear to people who are soon to die or perhaps even cause their deaths.

What is La Mala Hora?

La Mala Hora is described as a formless black blob that constantly moves and changes shape. It can change shape rapidly, going from the size of a coin to the size of a person in less than a second.

La Mala Hora lurks on isolated roads and highways waiting for weary travelers to attack. It is particularly fond of places where two or more roads intersect.

When La Mala Hora has laid eyes on it’s victim it rushes towards them and envelopes them, causing them to suffocate.

If the victim sees La Mala Hora they are either immediately driven insane or hypnotized by the sight of it, allowing it to attack.

Sometimes La Mala Hora is said to appear in the form of a woman. As a woman she has long, black, and bedraggled hair. She wears deep black clothing. She floats along with her feet just above the ground.

According the the legend if you see La Mala Hora in her female form it is an omen of death. Either you or someone you love will soon die.

One woman was driving alone one evening on the way to visit her friend in Santa Fe. Just after midnight when approaching an intersection in the road she saw a strange black shape floating in front of her car.

The woman screamed and slammed on her brakes. By the time she had come to a stop the black blob had disappeared.

While the woman was taking a few seconds to gather herself she heard a strange scratching sound. She turned to look out the window where the sound was coming from and was greeted with a horrific sight. A ghastly old woman was standing right next to her car, clawing at it. She had pale skin, long dark hair, pointy teeth and glowing red eyes.

The driver took off and the La Mala Hora ran after her but it eventually fell behind. The woman drove straight to her friends house, ran inside and locked the door behind her.

The woman told her friend what had happened. Her friend replied “You saw La Mala Hora. They say she only appears when someone is about to die.”

The woman was overcome with a feeling of dread and decided to drive home again as soon as daylight came. When she finally reached her house there was a police car waiting for her in the driveway. The police officer informed her that her husband had been killed earlier that morning; just after midnight.

A video telling the legend of La Mala Hora

Have you ever had an encounter with La Mala Hora? Let us know in the comments.

If you enjoyed this article you may also be interested in the legend of Hachishaku-sama or La Siguanaba.