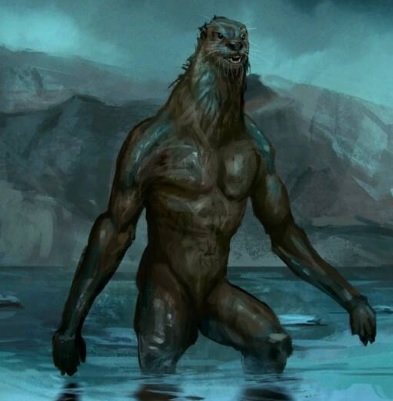 An artists depiction of a Kushtaka. Photo: ATI.

According to Tlingit mythology the Kushtaka is an evil shapeshifting creature that often appears in the form of a sea otter.

What is a Kushtaka?

Stories of the Kushtaka come from the Tlingit people of the Pacific Northwest Coast of North America.

The Kushtaka is described as a mischievous shapeshifting creature that often takes the form of a sea otter. It makes a distinctive whistling noise in the pattern of high-low-high.

Kushtaka are capable of taking almost any form but prefer to become sea otters or humans. Sometimes they appear as half human and half otter.

According the legend the Kushtaka are nasty creatures that take delight in leading Tlingit sailors into dangerous situations. They take pleasure in killing people or turning them into Kushtaka. It is believed that if you become a Kushtaka you can no longer be reincarnated.

Kushtaka sometimes mimic the cries of a child or a woman in trouble to lure good Samaritans into the water. Once there the Kushtaka will attack and tear the person to shreds or even turn them in to a Kushtaka.

In other stories the Kushtaka has a friendlier vibe. Sailors who were lost at sea have returned with stories of being kept warm by friendly Kushtaka.

Some stories claim the Kushtaka will distract the lost by showing them visions of their loved ones as sea otters. They may even transform the lost people in to Kushtaka so that they are able to withstand the freezing cold temperatures.

In some stories the Kushtaka will appear as a group of men who are lost or injured. If you attempt to help them they will draw you into the wilderness and then attack.

Kushtaka are able to be warded off with fire, urine, copper and dogs.

Every fisherman in South East Alaska has a story about the Kushtaka.

In one account two visitors were camping in the Alaskan wilderness with a friend who was a local. The two non-Alaskans went out fishing leaving their friend behind. When they returned they appeared frightened. They told their friend something strange had ran into the boat several times. It followed the men back into shore releasing a horrible guttural cry as it went.

A video with some Kushtaka encounters

Theories about the Kushtaka

Some believe that the legend of the Kushtaka story was made up to stop children from venturing too close to the water. It could also cause them to have a healthy distrust of strangers.

Have you ever seen a Kushtaka? Tell us your story in the comments!

If you enjoyed this article you may also be interested in the African Grootslang or the mysterious Ozark Howler.