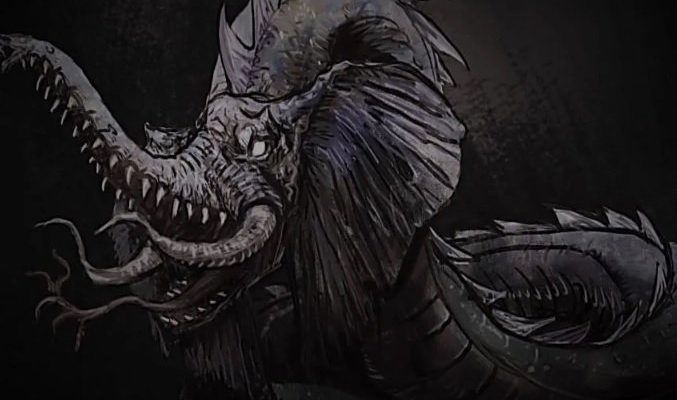 The Grootslang is a giant water creature, said to be a cross between an elephant and a snake, that has been seen in Africa since the early 1800s.

The Grootslang or Grote slang, is described as an elephant sized serpent or a large creature with the body of an elephant and a serpent like tail. Sometimes it is described as being 40-50 feet in length. It leaves tracks that are 3 feet wide. It is said to lurk in deep water and cave systems.

According to legend one Grootslang lives in the “Bottomless Pit” or “Wonder Cave” near Richtersveld. It is said that the cave connects underground to the sea over 40 miles away. The Grootslang is said to guard a large stash of diamonds within this cave.

The Grootslang is said to be as old as the world itself. It is believed that the Grootslang was one of the first creatures created by the gods. They mistakenly gave it too much power and strength and it dominated all of the other animals. The gods banished it to a cave to prevent it from destroying the world.

Locals greatly fear the Grootslang, believing it to be a very evil being. Legend has it that only one person has survived a trip to the wonder hole. The man abseiled down into the cave and dropped his electric torch.

Suddenly the air was filled with the stench of sulfur and the man sensed a powerful, evil presence. The man quickly climbed out of the cave and never returned.

Author George M. Eberhart has written a book called “Mysterious Creatures” which details several Grootslang encounters from the late 1800s to the middle of the 20th century.

Witnesses described seeing a monstrous serpent, much bigger than anything they had seen before. Others speak of a water monster that was larger than a hippo.

A video about the African Grootslang

Is is possible that Grootslang sightings were just misidentified pythons. Pythons can grow up to 25 feet in length. Seeing a 25ft long python in the wild would be pretty shocking for anyone.

It would however be unlikely that someone witnessing a giant python would describe it as looking like an elephant.

Do you think the Grootslang is real? Let us know in the comments.

If you enjoyed this article you may also be interested in the moon-eyed people of the USA or the Ozark Howler.