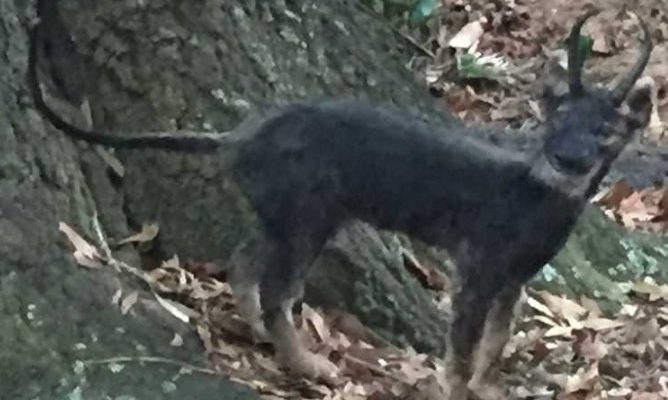 An alleged photo of the Ozark Howler. Photo: 4029 News.

The Ozark Howler is a creature the size of a black bear with prominent horns. It has been spotted several times since the 1800s in Arkansas, Oklahoma, Missouri and Texas.

What is the Ozark Howler?

A drawing of the Ozark Howler. Photo: Cryptid Wiki.

The Ozark Howler is described as being bear sized with a thick body and stocky legs. It has black or dark gray shaggy hair, red eyes that glow and large horns protruding from behind its ears.

The Ozark Howler has a cry that sounds like a cross between an Elk, a wolf and a hyena. Some witnesses have described it as sounding deep and guttural and half human. Others say it is high pitched like the scream of a woman.

The Ozark Howler is also known as the Devil Cat, the Hoo Hoo, the Black Howler or the Nightshade Bear.

An illustration of the Ozark Howler. Photo: kodriak

There have been many stories of Ozark Howler sightings passed down through the generations. It has become a popular urban legend in the area.

In 2014 a witness was driving in Benton County, Arkansas when they nearly collided with an unidentified creature. The witness described the creature as being bear sized, gray in color and very fast.

From 2010-2015, a family living in the Boston Mountains of Crawford County repeatedly saw a large black creature in the woods around their house. They set out trail cams and managed to capture images of a large black cat. Experts who reviewed the footage believe it may have been a cougar or a mountain lion. There are typically not any big cats living in the area.

A hiker out for a walk at the Rock Trail at Devil’s Den in 2015 claims to have captured a photo of an Ozark Howler. They submitted the images to Game & Fish who believe the images were photoshopped.

Possible Explanations for the Ozark Howler

A video exploring the Ozark Howler

As is the case with most cryptids, skeptics believe the reported sightings of the Ozark Howler are all hoaxes or cases of misidentification.

It is possible that a small number of large black cats have made their way to the area and are occasionally sighted and identified as being the Ozark Howler due to the popularity of the legend.

One university student made a bet that he could fool the cryptozoology community by creating a hoax with the Ozark Howler. This hoax does account for some of the reported sightings of the creature. Nevertheless the idea of the Ozark Howler predates this hoax by several hundred years.

Native Americans in the Ozarks have told stories of large black cats that carry the souls of the dead away. These stories could have combined with similar European stories from the settlers such as the legend of the Cù-Sìth. It is possible these legends have taken on a life of their own as the Ozark Howler.

What do you think is behind the sightings of the Ozark Howler? Let us know in the comments!

If you enjoyed this article you may also be interested in the mysterious Loveland Frogman or the Moon-Eyed People.