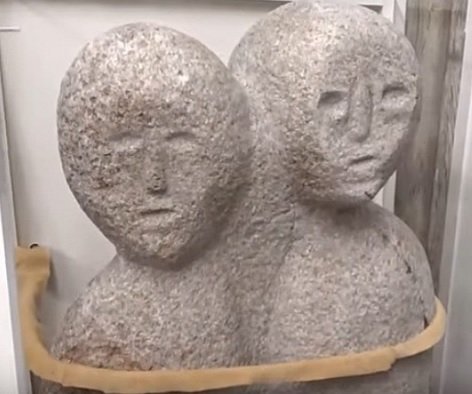 A Native American carving of the Moon-Eyed people. Photo: ATI.

Cherokee legends speak of a strange race of pale, blue eyed people who inhabited the USA before the arrival of European settlers. Where these people just unknown early settlers or something more mysterious?

The Moon-Eyed People of Appalachia

According to Cherokee legend there was once a pale, blue-eyed race of people living in Appalachia before European settlers began to arrive.

These people were dubbed the Moon-Eyed People due to being so sensitive to sunlight that they would only come outside at night. Even the full moon was too much for them and caused them to flee underground.

The Cherokee believed that they were human but just very strange.

The Moon-Eyed People were said to have built an underground cave system to live in. They also had small huts that were very low to the ground.

Legend has it that the Moon-Eyed People inhabited the land from the Little Tennessee River all the way North to Kentucky. Their territory was marked with 7ft tall stone walls along the borders. According to some accounts these walls were constructed as far back as 400-500 C.E.

The Creek people came up from the South and wanted to take this land for themselves. They attacked first observed the Moon-Eyed people and realised that they were weakest on the full moon.

On the next Full Moon the Creek tribe launched their attack and drove the Moon-Eyed people out of their land. They are said to have fled west to the smoky mountains and never returned.

Some believe they didn’t all flee but went underground, choosing to live permanently in their cave systems. People online have reported seeing strange little white people in caves in the Appalachian region.

Theories about the origin of the Moon-Eyed People

A child with albinism. Were the Moon-Eyed People Albino?

Some people believe that the Moon-Eyed People were a group of Welsh settlers that arrived in America more than 300 years before Columbus. They claim that the tribe were led by a prince called Madoc.

Some stone ruins at Fort Mountain were believed by the Cherokee people to have been left by a the Moon-Eyed People led by Madoc. A plaque was erected at the site in 1968 to commemorate this.

This theory has been quite a pervasive one considering there is very little evidence supporting it.

Stacey McCain argued in an article for the Rome Tribune that the original Cherokee legend never mentioned the skin color of the Moon-Eyed People. She believes their whiteness was first added to the legend by a white author named Benjamin Smith Barton in 1797. Barton believed that the Moon-Eyed people may have been an albino group of Indigenous Americans.

This adds another angle to the story. If the Moon-Eyed people weren’t just extra early settlers then who or what were they?

Maybe they were just a large family of Albino Native Americans who suffered in the sunlight. That doesn’t explain their disdain for the full moon however.

Could they have been vampires or some other type of paranormal creature that has been lost to the ages? Maybe even aliens? Do they still live in an underground cave system beneath America? We may never know for sure.

Where do you think the Moon-Eyed people came from? Let us know in the comments!

If you enjoyed this article you may also be interested in the Central American legends of the Lechuza or the Cadejo.