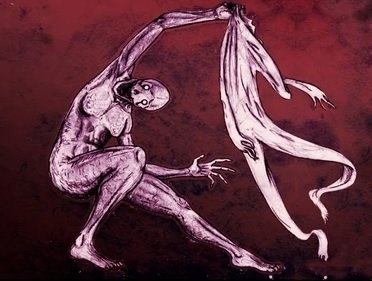 An artist’s depiction of a Boo Hag ripping off it’s skin. Photo: Villians.Fandom.

The Boo Hag is a witch from the Gullah culture that bears many similarities to the creatures commonly seen during sleep paralysis. Are they one in the same?

What is the Boo Hag?

A video describing the Boo Hag and their origins

The Boo hag is a witch from the Gullah culture: an African American ethnic group from the Carolinas, Georgia and Florida. According to legend the Boo Hag is completely red and has no skin. The creature will steal skin from its victims, wearing them like clothes in order to blend in with the people around them.

The Boo Hag is like a vampire but instead of living off blood the creature lives off the breath of it’s victims. When going out to find a victim, the Boo Hag removes it’s skin and is able to enter homes through the tiniest of cracks.

The Boo Hag ‘rides’ a victim by hovering above them as they sleep and stealing their breath. The victim will not necessarily be aware that they have been the victim of a Boo Hag but may awaken feeling lethargic, out of breath and dizzy.

The victim usually experiences vivid and intoxicating dreams while being attacked by a Boo Hag. If the victim struggles too much the Boo Hag may decide to kill the victim and take their skin as their new disguise.

A Boo Hag can be stopped by finding where they store their skin while they are out, usually under the stairs, and filling the skin with salt an pepper. This will leave the Boo Hag unable to return to their skin and leave them vulnerable.

Similarities between the Boo Hag and Sleep Paralysis Demons

Most people have experienced sleep paralysis at least once in their lives. When we are sleeping our brains paralyze our bodies so that we can’t act out our dreams and hurt ourselves while we are sleeping.

Sometimes we wake up before our bodies have been released from the paralysis and this causes us to wake up and be aware of our surroundings but unable to move or speak.

During sleep paralysis it is common to see shadow people lurking in the corner of the room or to see a hag sitting on your chest.

The hags people often describe during sleep paralysis sound very similar to the legend of the Boo Hag.

Theories about the Boo Hag

It is also possible that a real paranormal entity exists that is only able to reach through into our consciousness when were are in a vulnerable state such as the state between sleeping and waking.

Do you think the Boo Hag is a real entity or just a sleep paralysis hallucination? Let us know in the comments.

If you enjoyed this article you may also be interested in the particularly unnerving story of the Demon Hag of Detroit or the Irish Sluagh.