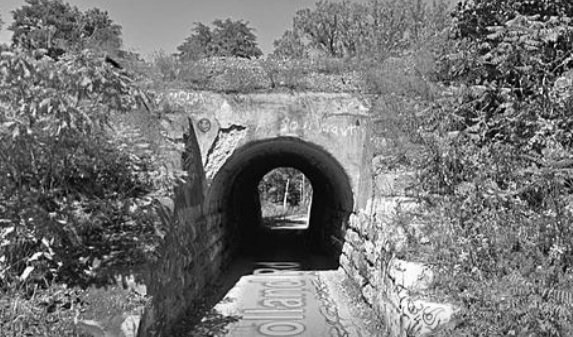 Holland Road, also known as Pigman Road, in Angola, New York is known locally as a place of tragedy and despair. Many claim that the spirits of those killed in there still lurk around the area, especially the Pigman Road Bridge.

Holland Road in Angola, New York gained its nickname, Pigman Road, from the legend of a local butcher who would place the heads of pigs on stakes along the street in the 1950s and 1960s.

Legend has it that the same butcher shot a man and killed him then hung his body on a meat hook in his shop.

In another local story it is said that the Pigman captured and murdered five young boys, cut their heads off and placed them on stakes along the bridge. The story goes that the Pigman was busy one evening working on some pig carcasses when some school boys started hanging around in the bushes outside his home watching and giggling to themselves.

Pigman was enraged by the presence of the boys and killed them, placing their heads on stakes outside his property as a warning to anyone else who wanted to bother him.

It’s not just the Pigman that haunts Holland Road. On the 18th December 1967 a six car passenger train derailed near Pigman road. Fifty people died in the tragedy and another forty received severe burns.

Locals believe the spirits of these victims still haunt the area surrounding Pigman road and their cries and screams of pain can still be heard on otherwise quiet evenings.

A junior at the University at Buffalo named Mike Saad had a terrifying experience at Pigman Road. Mike had heard stories about Pigman Road and decided to take a girlfriend there, hoping to impress her.

When the couple got out of their vehicle and walked around under the bridge they found a whole lot of graffiti talking about Pigman. Suddenly they heard squealing noises, like those of a startled pig. They looked around but couldn’t find a source of the noise. Eventually the couple retreated to their car, terrified. Mike was so spooked by his experience he has never returned to Pigman Road.

Many other people online claim to have had spooky experiences at Pigman Road including hearing screams, being followed by black figures, children’s handprints appearing on their vehicles and dogs being suddenly agitated for no reason.

Have you ever been to Pigman Road? Let us know in the comments!

If you enjoyed this story you may also like to learn about crybaby bridges or Zozo, the ouija board demon.