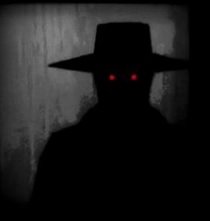 An artist’s depiction of the Hat Man, a shadowy figure who haunts thousands of people around the world.

Around the world thousands of people have reported seeing an entity known as the Hat Man while falling asleep. Is the Hat Man a shared hallucination or some kind of spiritual entity?

Encounters with the Hat Man

Many people around the world have similar stories about encountering the Hat Man. A typical story involves the person suddenly waking up in the middle of the night. As they peer out into the darkness they see a figure in their doorway.

The entity is a dark silhouette of a person wearing a wide brimmed hat. The person is unable to move or scream for help.

Sometimes seeing the Hat Man is accompanied with an extreme feeling of fear or impending doom.

Eventually the Hat Man fades away into nothing and the person is able to move again.

Thousands of people around the world have reported seeing the Hat Man watching them in the night. Timothy M. Brown Jr has dedicated himself to documenting encounters with the Hat Man on his blog: The Hatman Project.

The Hat Man project has hundreds of stories of people’s encounters with the Hat Man. They range from terrifying encounters to stories where the Hat Man seems to be trying to protect the person.

One man’s story gained particular traction. You can watch here:

Possible Explanations for the Hat Man

The Quartz Documentary about the Hat Man

Hat Man encounters almost always happen when the victim is falling asleep or waking up. This has lead some people to believe the Hat Man is just a commonly occurring hallucination caused by sleep paralysis.

Sleep paralysis is when someone partially wakes up during the REM stage of sleep, when the most vivid dreams occur.

During REM sleep the body relaxes all of it’s muscles to the point where they can’t be used. If someone wakes up during this point of sleep they will be conscious but unable to move. They may also see their dreams merge with the real world around them.

There are other theories that the Hat Man is some kind of spiritual or interdimensional entity that feeds off of the fear of humans. This would explain why so many thousands of people around the world see the same thing.

How to Get Rid of the Hat Man

The NHS recommends getting 6-8 hours sleep, going to bed at the same time every day and getting plenty of exercise as ways to prevent sleep paralysis.

Avoid sleeping on your back or having a big meal, alcohol or nicotine right before bed.

If you are worried about negative spiritual energy you could try a banishing ceremony or lighting some incense to clear out any bad juju.

What do you think causes the Hat Man encounters? Let us know in the comments.

If you enjoyed this article you may also enjoy reading about hypnagogic hallucinations or shadow people.