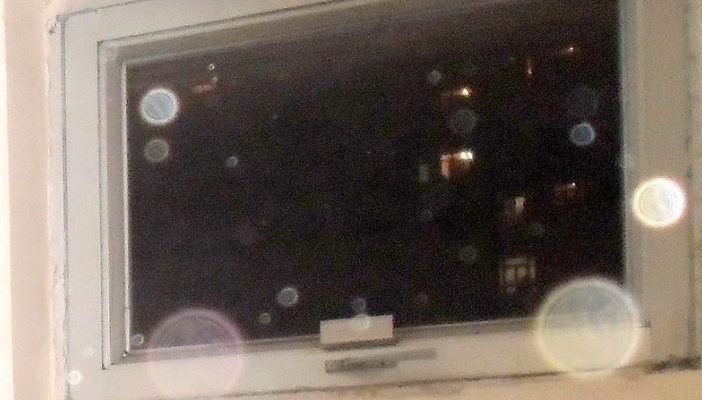 All paranormal enthusiasts are familiar with the concept of ghost orbs: little balls of light that mysteriously appear in photos and video footage. These orbs can also be caused by natural means so how do we tell the difference?

How dust orbs appear in photographs. Do ghost orbs work in a similar manner? Photo: Sony.

Most orbs that appear in photos and videos are probably just dust particles that have been made visible by a certain type of lighting. Low light conditions where a flash is used are more likely to show up dust orbs.

In photography the phenomenon of dust orbs appearing in photos is known as backscatter.

Backscatter: dust orbs illuminated by a camera’s flash. Could these sometimes be ghost orbs? Photo: Wikipedia.

So how do we know when an orb is likely to be a ghost?

An orb in a photograph is more likely to have a ghostly origin if the photo was taken in natural lighting. Orbs that show up in a camera’s flash are much more likely to be dust particles.

Ghost orbs in videos move in ways that seem unnatural. Dust particles will slowly float around all in the same direction. If one orb seems to move differently from others that appear it may be a ghost orb. Be aware that sometimes bugs appear as orbs in photos and videos.

Orbs that are clearly in the scene and not close to the camera lens are more likely to be ghost orbs.

If other paranormal activity is occurring at the same time it might be more likely that you are capturing a ghost orb.

Use the live photo function on your phone camera. This way you can see a few seconds of movement on either side of the photo which help you to identify bugs vs ghost orbs.

Take video as well as photos. Things can appear strangely in a photo that can be seen to be normal in a video, when you have more context.

Have you ever captured a ghost orb on camera? Let us know in the comments!

If you enjoyed this article you may also like to learn about paranormal fog or the ghostly handprint left behind by Frank Leavy.