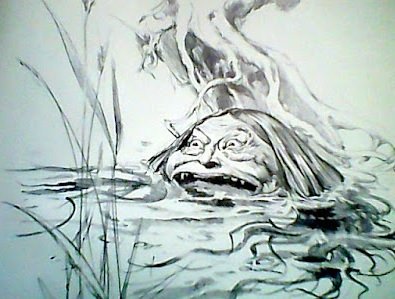 Have you ever been walking along the gorgeous River Tees and suddenly felt a sense of unease when approaching some areas? You may have been about to encounter the water spirit known as Peg Powler.

The Legend of Peg Powler

Peg Powler is a water spirit form English folklore that haunts the River Tees. Peg Powler is described as looking like a beautiful young woman with long, flowing green hair. When you get closer you notice her arms and legs are unnaturally long and she has long sharp claws and sharp green teeth.

Her first haunt was the area called Cow Green but she has since taken to haunting the entire River Tees.

She is said to lure victims into her lair by pretending to drown. When her victim valiantly enters the water to try and help her she will pull them under the water and drown them.

Peg Powler has an insatiable appetite for human life and will attempt to lure anyone she can into the water so she can devour them.

All that is left of Peg Powler’s victims is the green froth or foam that sometimes appears on the River Tees and has been dubbed Peg Powler’s suds or Peg Powler’s cream.

Tales are told in local areas of children who ignored their parents warnings about playing too close to the river and were subsequently pulled into the water by Peg Powler.

Peg Powler is very similar to the legend of Jenny Greenteeth, another swamp spirit who seeks to drown children or elderly people and devour them.

A fast flowing area of the River Tees. Photo: internetgeography.

The story of Peg Powler may have been made up by savvy parents trying to keep their children away from dangerous waters in the River Tees.

The legend may also help people to cope with the loss of young men who drowned in the water while out drinking, mistaking the green river weeds for the safety of grass.

Have you ever spotted Peg Powler on the River Tees? Let us know in the comments.

If you enjoyed reading about Peg Powler you may also like to learn about Jenny Greenteeth or or the giant Japanese woman spirit Hachishaku Sama.