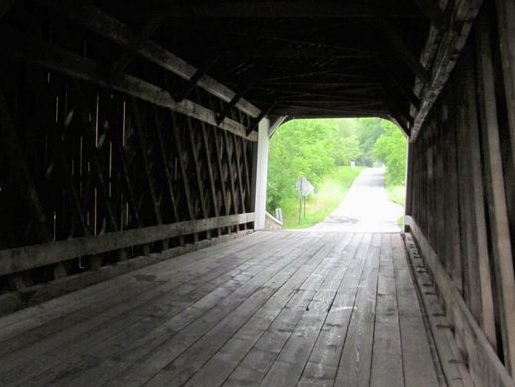 Across America there are legends of bridges that are home to the mysterious crying of an unseen baby. Some say the cries are of unwanted babies who were murdered by their parents on the bridge.

There are several legends of crybaby bridges from around the US. Here are some of the most well known:

The Maud Hughes Road Bridge is said to have been the site of dozens of suicides and horrific accidents.

The bridge stands 25 feet tall over a set of railroad tracks. At least 36 suicides have taken place on the bridge.

Locals have reported seeing unexplained lights, hooded figures, weird patches of mist and even a phantom train around the bridge. On some nights you can hear the frantic cries of a newborn baby from the bridge, but no babies can be found in the area.

One local legend goes that a man and a women were driving over the bridge when their car stalled at the top. The man left to go and get help while the woman stayed with the car.

When the man returned to his vehicle the girl was hanging by the neck from the side of the bride. The man is said to have mysteriously dropped dead on the spot from unexplained causes.

To this day people claim to hear a disembodied women’s scream followed by a mans scream while standing on the bridge.

Another story associated with this bridge is that of a woman who was being chased down the road near the bridge.

It was dark and the woman didn’t know the area well. She ran onto the bridge and assumed there would be water underneath for her to make her escape by swimming to safety. She jumped from the bridge and fell to her death on the train tracks. It is said on warm summer nights you can still hear echoes of the woman’s screams.

Another popular legend that is told about this bridge is the story of a mother who could no longer cope with being a parent. She threw her baby from the bridge and then hung herself off of the side.

The Egypt Road Crybaby Bridge. Photo: Only in your state.

This crybaby bridge is off Egypt Road near Salem, Ohio on what used to be West Pine Lake Rd. The bridge now leads to a dead end.

According to legend the sound of a crying baby often heard on the bridge is the ghost of a child that fell in and drowned.

There are also stories associated with the bridge that claim a satanic cult uses it as a part of their evil rituals.

In 2010 an elderly woman was found strangled to death and burned up just off to the side of the bridge.

To this day the cries and screams of a baby can be heard day and night while standing on the bridge.

Some even say anyone that crosses over the bridge will disappear and never be seen again.

The Van Sant Crybaby Bridge was built in 1875 and spans the lovely Pidcock Creek. It has also been known as the Beaver Dam Bridge.

According to the legends a young woman became pregnant out of wedlock. Her family disowned her for this and she was incredibly upset.

The young woman eventually gave birth to a healthy child. The following evening she crept out under the cover of darkness to Van Sant bridge. She clambered to the top of the bridge then threw the baby off. Distraught at what she had done she then hung herself.

Locals claim that if you park your car on the bridge you can hear the cries of the poor lost baby. You may also hear the toes of it’s mother scrapping on your car roof.

As well as being associated with the hanging mother this cry baby bridge also was once used as a hanging place for horse thieves.

Near the border of Oldham and Jefferson counties in Kentucky on Sleepy Hollow Road lies another infamous crybaby bridge.

It is said that many mothers over the years have dropped their sick, deformed or unwanted babies over the side of the bridge to drown.

To this day the cries of babies and young children are heard from this bridge.

The bridge is closed to traffic during the winter months and belongs to the Rogue’s Hollow historical society.

All of the bridges seem to be connected to horrific tales of the death of babies. Maybe the residual energy from such terrible events has caused a residual haunting in the form of a babies cries.

Aside from the paranormal explanation of ghostly babies, what else could it be?

There may be something about the structure of the bridges or the surrounding environment that causes wind whistling through the area to sound like a baby’s cry.

Perhaps there are animals or birds in the areas that happen to sound like a human baby. Some have suggested red foxes as one possible culprit.

Maybe the way the water hits certain parts of the bridge causes a sound that sounds like a human baby.

It’s hard to know for sure if the noises are truly paranormal in origin without ruling out all other explanations first.

Have you been to any of these crybaby bridges or know of any other ones? Let us know in the comments!

If you enjoyed this article you might like to learn about another paranormal bridge the seems to cause hundreds of dogs to jump from it to their deaths.