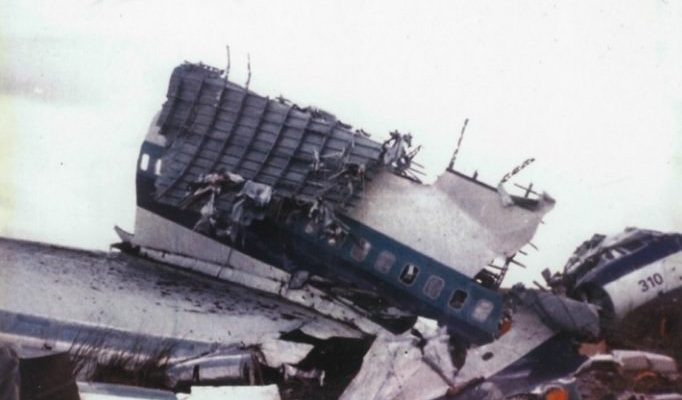 After a tragic plane crash that killed 101 people, flight attendants on subsequent flights began to witness many strange events. The ghost of pilot Bob Loft, who died in the crash, was seen several times, even warning the crew about faulty electrics on their aircraft.

The Tragic End of Flight 401

The wreckage of Flight 401, said to contain the ghosts of Bob Loft and Don Repo. Photo: Ron Infantino.

The flight was headed by 55 year old Captain Bob Loft. Bob loft was a very experienced and well regarded pilot who had been with Eastern Airlines for 32 years.

His flight crew was made up of First Officer Bert Stockstill, 39, and Flight Engineer Don Repo, 51. An off duty technical officer for the company named Angelo Donadeo, 47, was also on board.

The flight proceeded as normal until they began to get ready for the descent into Miami. The crew tried to lower the aircraft’s landing gear but the indicator light signalling it was down didn’t come on.

The crew put the flight on autopilot and planned to circle overhead until they could figure out if the landing gear was functioning correctly.

While they were distracted by this problem the crew failed to notice that the autopilot was not working. The flight gradually lost altitude and crashed into the everglades.

101 people were killed in the accident and 75 people survived. First Officer Stockstill was killed on impact while Captain Bob Loft died in the wreckage. Both Don Repo and Angelo Donadeo initially survived the crash but Repo later succumbed to his injuries in hospital.

In the year and a half following the accident many Eastern Airlines crew members reported seeing the spirits of Bob Loft and Don Repo during flights.

A flight attendant was making preparations for food service in the galley when she saw Don Repo’s reflection in an oven door. Startled, she called out to two fellow crew members to come and see it and they both recognized the face to be that of Don Repo.

The face in the oven then said “watch out for fire on this plane”. On the returning flight the plane’s engine caught fire and had to be shut down.

Another flight attendant on a flight from New York-Miami flight opened an overhead bin for place a passengers luggage when she saw Bob Loft’s face staring back at her from inside.

An entire cockpit crew claim they saw Bob Loft sitting among them on another Eastern Airlines flight. They said Loft warned them about some faulty wiring which was then found and repaired.

Even the vice president of Eastern Airlines claimed to have seen Bob Loft on a plane as it prepared to take off from JFK airport.

This 1978 movie was based on the true story of flight 401 and the ghost stories that followed.

It was soon discovered that the flights that had the paranormal activity all had parts salvaged from the wreckage of 401 used in them. The psychic phenomenon of psychometry is when spirits are said to be connected to physical objects.

Perhaps the ghosts of Don Repo and Bob Loft were intertwined with the parts of the wreckage of Flight 401 and when those parts were put in another plane they were able to connect with the living through those parts.

It is also possible that the collective trauma from having so many coworkers and friends die caused the Eastern Airlines crew members to have shared hallucinations or delusions. It is strange that their stories would all be so consistent with one another if this is the case.

Do you think the ghosts of Don Repo and Bob Loft were haunting Eastern Airlines or something more mundane was happening? Let us know in the comments.

If you enjoyed this article you may also be interested in the disappearance of Frederick Valentich’s flight or the ghosts seen in the London Underground.

(Affiliate link. We may earn a commission.)