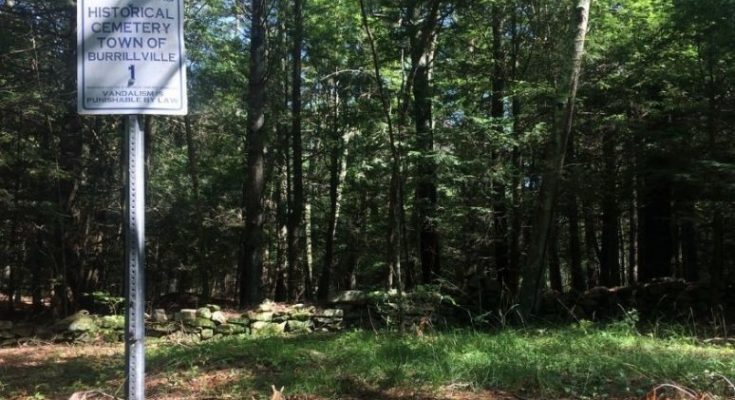 Legend has it that if you dance 13 times around the grave of Laura Sherman In Burrillville, Rhode Island you will be visited by her ghost.

Who was Laura Sherman?

A small family burial plot lies unmarked at the crossroads of Croff Rd and Wakefield Rd in Burrillville, Rhode Island. Over the years the tombstones have all been stolen, perhaps by people trying to keep a bit of the legends history for themselves.

All the is left is the base of the headstone of Laura Sherman. She lies there with 4 other members of her family:

It appears that the Sherman family lived a secluded life out in the isolated woods of Buck Hill. Laura was the oldest and probably the matriarch of the family.

No one knows much about Laura or the Sherman family but the legend of her ghost has brought people from far and wide hoping to catch a glimpse of her.

The legend of Laura Sherman’s ghost has been passed down through several generations in Burrillville. Many locals have claimed to see Laura’s ghost standing outside the cemetery as they drive passed.

Local man Gary Patterson grew up playing in the woods around Burrillville. He told ThePublicsRadio the story of a girl he went to school with.

The girl came up to the cemetery with some friends one night and they all danced around Laura Sherman’s headstone 13 times.

Nothing of note happened so the girls decided to go home.

The next day at school one of the girls mentioned that she had seen an old lady in the back seat of another girl’s car as she was driving away.

The girl who was driving was very frightened. She began seeing an old lady standing behind her every time she looked in a mirror. She ended up having to see a psychologist and after graduating she left town and never came back.

If you enjoyed this article you may also enjoy learning about the Dungarvon Whooper or the Rose of the Vulcan.