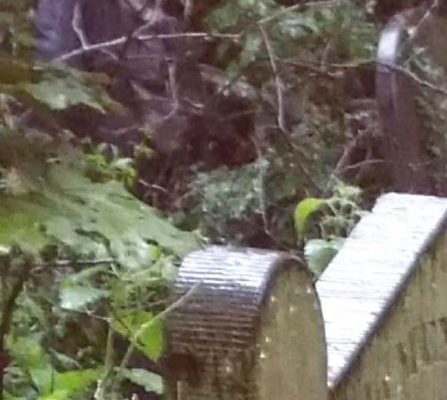 Jenny Greenteeth is a water spirit from English folklore that is said to pull children and the elderly into waterways to drown them. She was reportedly captured on camera by an Australian tourist in 2018.

The Legend of Jenny Greenteeth

A pond full of duckweed that would make a wonderful home for Jenny Greenteeth. Photo: Wikipedia.

The legend of Jenny Greenteeth is linked to the Lancashire region in the UK.

Jenny Greenteeth is said to be an evil water spirit who lives beneath the duckweed in ponds, gravel pits, canals or any form of stagnant water.

Any children or elderly people who stray too close to Jenny Greenteeth’s lair will be grabbed and dragged under the water.

Once her victim died from drowning Jenny Greenteeth would proceed to eat them.

In 2018 Jenny Greenteeth was reportedly sighted at the St James Cemetery in Liverpool, England.

An Australian tourist named Karen Hargreaves was drawn to the cemetery by the many accounts of paranormal activity reported there on Facebook.

While in the cemetery Karen captured a photo depicting a mysterious figure with long black hair wearing a dark cloak. The area the figure was in was overgrown with nettles and weeds. Karen was certain no one else was in the cemetery with her when she captured the photo.

Karen shared the photo on Facebook and many locals were quick to point out the similarities between this figure and Jenny Greenteeth.

They said that the legend of Jenny Greenteeth had originated from the same part of the city as the St. James Cemetery, based on a homeless woman or witch with rotten teeth that lived close by.

It has been suggested that Jenny Greenteeth was a made up story to stop children from venturing too close to dangerous waterways covered in duckweed.

Perhaps the local homeless woman with bad teeth became the inspiration for such a mythical figure and her image became intertwined with the story.

It is also possible that paranormal activity in the St. James Cemetery morphed into the Jenny Greenteeth legend.

If you enjoyed this article you may also like to learn about La Llorona or the ghosts of Glamis Castle.