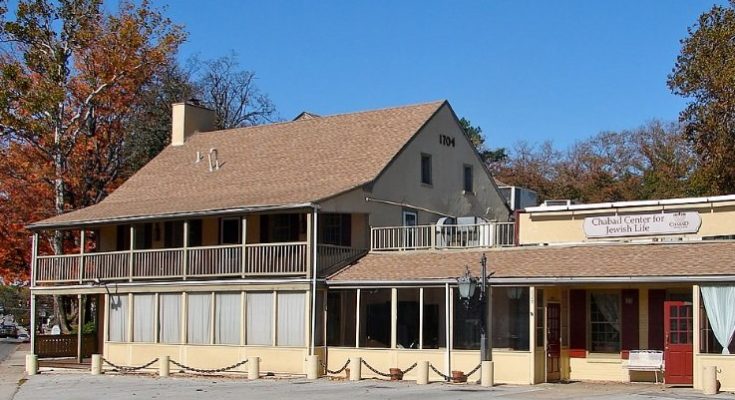 The General Wayne Inn in Merion, Pennsylvania has a troubled history of murder and suicide and is now believed to be home to several spirits with unfinished business.

History of the General Wayne Inn

The original building on the site of the General Wayne Inn was a special gathering place built by Robert Jones in 1709. When Jones died in 1746 he left the property to his grandson who rented it to a man named Anthony Tunis.

Anthony Tunis turned the building into the Tunis Ordinary, serving meals to weary travelers from the nearby King’s Highway at a fixed price. In 1775 Abraham Streaper bought the Inn and continued its legacy as an establishment of refreshment.

During the American Revolution and the Civil War the General Wayne Inn provided some relief to passing soldiers. The Inn continued on until it was eventually closed in 2005 and became a Jewish synagogue and wellness centre.

The General Wayne Inn was thought to have been the oldest continuously functioning inn in America. Many famous people have stayed at the General Wayne Inn including George Washington, Ben Franklin, and Edgar Allen Poe. It is even thought that Poe wrote part of his famous “The Raven” while staying there.

Murder and Suicide at the General Wayne Inn

Chef Jim Webb and businessman Guy Sileo partnered up to purchase the General Wayne Inn in 1995. They ran the Inn together for about a year but were plagued with financial problems.

On the 27th December 1996, Jim Webb was found dead in his office at the Inn and it appeared he had been murdered.

Police suspected that Guy Sileo had murdered Webb in order to claim on his $650,000 life insurance policy and use the money to pay his debts. Sileo claimed that it couldn’t have been him because he was having dinner with his girlfriend, 20 year old assistant chef Felicia Moyse, on the night of the murder.

Police discovered that Sileo had left the General Wayne at the same time as his girlfriend both in separate vehicles. Sileo then doubled back and murdered Webb, then rushed to the dinner venue in order to beat Felicia there.

Eventually Felicia realised her boyfriend had murdered Webb and used her as an alibi. Unable to cope with this Felicia committed suicide on February 22, 1997.

Sileo was convicted of the murder of Jim Web in 2001 and sentenced to life in prison.

Even before the murder and suicide at the General Wayne Inn it was notorious for paranormal activity. The Inn featured in an episode of Unsolved Mysteries in Season One, Episode Seven. You can watch it below:

Ghost sightings at the General Wayne Inn have been reported as far back as 1848. In this year an election took place at the inn. A woman who helping with the voting process went down into the cellar to collect some more ballots.

While she was down there she saw soldier in a green uniform. When reporting what she had seen the woman described the uniform of the soldier as being exactly what the Hessian soldiers wore during the Revolutionary War.

This same soldier has been seen multiple times by various guests and hotel workers over the years. Waitress Alice Gormley was walking through the dining room one evening when she heard someone calling her name.

She turned to the hallway to see where the voice was coming from and saw an apparition of a frightened soldier standing on the stairs. The soldier disappeared before her eyes.

Another unexplained incident occurred in 1987, when a valet was walking past a Cadillac that was parked outside the Inn. The owner was inside the Inn having a drink and had his keys with him.

All of a sudden the car began blaring its horn and the window wipers were set off. The cars doors and windows were all closed and locked. Neither the valet or the owner of the car could explain what happened.

One of the General Wayne Inn’s former owners, Barton Johnson, claims to have seen many ghostly events but no ghosts themselves. He has often seen an unseen force going down the bar blowing on the back of all of the girl’s necks. When this happens each girl seems to turn around in sequence looking for whoever it was that was playing a prank on her.

A former maitre de of the General Wayne Inn named Dave Rogers claimed to have seen a ghost one night when he was closing up the restaurant. While walking out of the kitchen he saw a decapitated head sitting on a chest of drawers. It took a few seconds to register what he had seen and when he turned back to look the head was gone.

One evening a number of patrons were watching a Halloween newscast featuring the General Wayne Inn on a TV at the Bar. When the story started playing the TV strangely began rotating clockwise on the spot until the end of the story. This never happened again before or after.

Many regular patrons of the General Wayne Inn were convinced that it was haunted reporting strange occurrences such as towels being thrown across the room by unseen forces, interference with electronics in the Inn and many sightings of ghosts.

Would you still be keen to stay at the General Wayne Inn after hearing all this? Let us know in the comments.

If you enjoyed this article you may also like to learn about the Grey Man of Pawleys Island or the ghost of Phillip Babb.