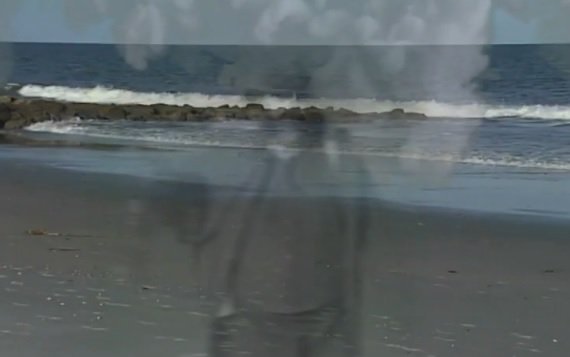 Hundreds of people have reported seeing a ghostly figure during intense storms on Pawleys Island. Locals claim the appearance of the figure is a bad omen meaning the storm will be destructive but usually the people who witness the Gray Man are spared.

Pawleys Island is a small town located on an Atlantic Coast Barrier Island in South Carolina.

The earliest inhabitants of the area were the Native American Waccamaw and Winyah people who had inhabited the land for over 10,000 years. European colonizers moved in during the 1500s having a devastating effect on the native population causing many to die from introduced diseases or from starvation after their hunting grounds were seized.

It was established as a resort town in the early 1700’s when plantation farmers stayed there during the sweltering summer months to escape from mosquito borne malaria upstream.

Nowadays the town has a leisurely vibe and is booming with tourists during the warmer months.

The Legend of the Gray Man of Pawleys Island

There are a number of variations in the legend depending on who you ask but the common themes are as follows.

A young man and woman were in love and engaged to be married. The man had been working at sea for a long time and had finally come ashore in Charleston. He jumped on his horse and headed for Pawleys Island to be reunited with his love.

A big storm was approaching and the man decided to take a shortcut through the marsh just outside of Pawleys Island to try and get there faster.

The young woman was distraught over the death of her lover and would take regular walks on the beach of Pawleys Island to try and clear her mind and find some peace.

One day on one of her walks she came across a man dressed all in gray. As she got closer to him she recognized that he was her lost love.

Knowing her lover was dead and it couldn’t possible be him the woman questioned the man. He couldn’t answer her questions. He repeatedly told her to take her family and leave the island as a deadly storm was approaching.

Before she even had time to fully process what was happening the man vanished before her eyes. The woman rushed home and told her family what had happened.

In shock from the sighting they all gathered up their belongings and headed inland. A few days a later a powerful hurricane swept through the region leaving only one home on Pawleys Island untouched: the home of the young woman.

In other legends the Gray man is said to be the ghost of a local publican or even the founder of the community George Pawley himself.

According to local legend the Gray Man still appears on Pawleys Island in the days before a large storm. Some believe he is still searching for his love.

Legend has it the Gray Man will try to warn anyone he encounters to leave the island before a deadly storm hits and if the witness takes his advice their home will be miraculously spared from the storm.

Sightings of the Grey Man

For some residents of Pawleys Island the Gray Man is more than just a legend. They have witnessed him for themselves!

Hurricane Hazel hit Pawleys Island in 1954 causing dozens of deaths and widespread damage. Several residents reported seeing a man wearing all gray walking on the beach just as the storm was coming in.

In 1990 Hurricane Hugo struck Pawleys Island causing the island to look like a warzone. A 16 foot storm surge powered over the island causing it to be cut in half. More than a hundred homes were destroyed in the storm.

One of the homes that was saved belonged to the Love family. Arney Love recalled to gardenandgun.com that his parents had gone down to their holiday home at Pawleys Island to board it up before hurricane Hugo.

After his parents had left Pawleys Island one of their friends was driving by and thought they saw Arnie’s dad, wearing all grey, out on the lookout. Once they heard Arnie’s dad had already left they realised it might have been the grey man that they saw. In the end the Love’s house was one of the few that were spared.

Another Frequent Pawleys Island visitor Melanie Moore Tanner described a similar story in a weather channel documentary. Tanner’s parents saw a a shadowy male figure dressed in all gray on the beach near their home just before hurricane Hugo. Their beloved family survived the storm which was especially luck since their insurance had lapsed just weeks beforehand.

More recently in 2018 several people reported seeing the Gray Man walking along the coast of Pawleys Island before Hurricane Florence hit. The hurricane caused $24 million in damage and caused 54 deaths.

If you’re ever out walking the beaches of Pawleys Island be wary of the Gray Man. If you see him you know its time to get out of there!

If you enjoyed this article you may also enjoy the story of the ghostly handprint of Francis Leavy or the legend of the Elmore Rider.

The Gray Man of Pawleys Island by Sasha Yeager.