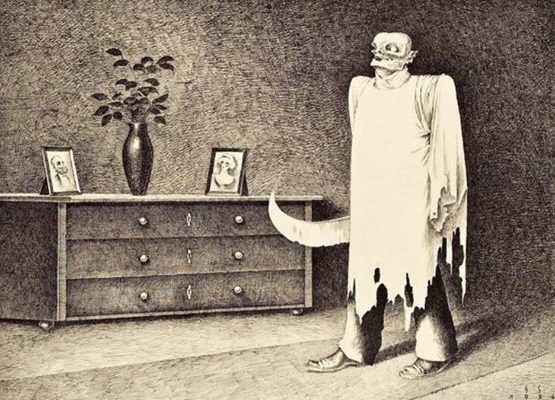 An artist’s depiction of a ghostly butcher with a large knife. Photo credit: wikiart.

The Isles of Shoals are filled with stories of pirates, shipwrecks, murders and ghosts. One of the most well-known of these is the ghost of the infamous Phillip Bab.

The Isles of Shoals

A map of the Isles of Shoals. Image credit: Wikipedia.

The Isles of Shoals are a small group of islands off the East Coast of the United States near Maine and New Hampshire. They have been occupied for more than 400 years, initially by fishing communities and have more recently become a home to a small community as well as a large seasonal hotel and a marine research facility.

Who was Phillip Babb?

Phillip Babb was born around 1634 in England. He married a woman named Mary and had several children. Babb lived on Appledore Island in The Isles of Shoals and worked as an innkeeper, butcher and a police constable. Legend has it that he was a pirate in his younger days and chose to retire to a more peaceful life on the Isles.

Babb was not particularly well liked on the island of Appledore. He was known as being a rude, evil and loathsome man, always wearing a bloodstained butcher’s frock with a large knife sheathed on his belt.

He lived on the southern side of Appledore Island in a small cottage near the cove. It is documented that he forced another islander to dig a large hole near the cove for some unknown reason. It is speculated that Babb had either acquired some gold is his pirate days or happened to find some on the island and used this hole to bury it for safekeeping.

Phillip Babb died in the 3rd of March 1671 but his spirit is not at rest. It is said he is still roaming the island causing havoc to this day.

Sightings of the Ghost of Phillip Babb

Phillip Babb’s body was buried in his family plot on Appledore Island, but his ghost still roams the island, especially near the cove, watching over where his precious treasure once hid.

A local man was working late in his workshop one evening when he a wild looking man running towards him. At first he thought it was one of his friends playing a prank on him. As the figure grew closer he realised it had the grey, hideous face of a corpse and terrifying sunken eyes.

The angry apparition then drew a giant butcher’s knife from its belt and held it up to the frightened local’s face. The man immediately ran home without looking back.

Another island dweller saw a mysterious figure wandering around aimlessly in the night at Babb’s Cove. The man knew everyone who lived on the island but could not identify this person walking the cove in the night. The dark figure began to approach the witness, making no sound as it moved.

As it got closer the man recognized the figure as Phillip Babb with his giant form, black eye sockets and slightly reflective butcher’s frock. The man shouted at the specter who quickly moved away down the path before vanishing.

Many other locals have stories of run-ins with the terribly unpleasant ghost of Phillip Babb, always seeing him with his giant knife and butcher’s frock.

A huge storm in 1851 filled in the hole where Babb’s treasure was supposedly buried and it is now covered with a coast guard house. No one knows for sure what happened to Phillip Bab’s treasure but his spirit will forever roam the land protecting where it once lay.

If you enjoyed this article you may also enjoy reading about a ghostly Old Coot or the Dungarvon Whooper.