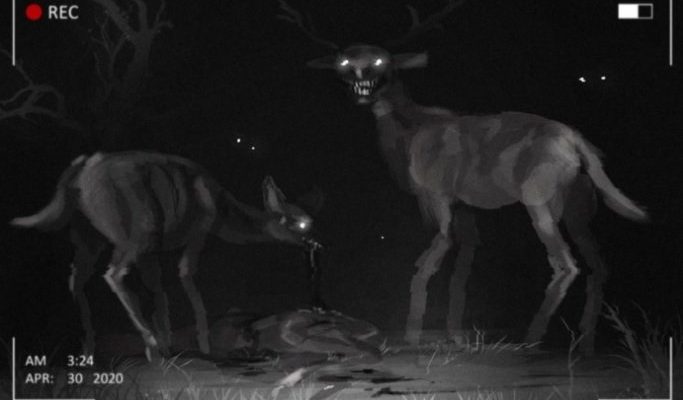 Not Deer: the Appalachian cryptid that is like a deer but just not quite right. Artwork by GlitchLight on DeviantArt

The Appalachian mountains are some of the oldest in the world, home to many hardworking people and reportedly a number of cryptids. One of these is the Not Deer, a creature that looks like a deer but something is just not quite right about it.

A map of the Appalachian Mountain Range – Image Credit: Wikipedia.

The Not Deer is described as looking just like a normal deer until you get a closer look. It is difficult to describe Not Deer as they are known not so much for what they look like but for what they don’t look like.

Not Deer are often described as initially looking like a normal deer but upon further examination there is something wrong. Not Deer might have misshapen legs, the forward facing eyes of a predator or unusually large, pointy teeth.

Not Deer don’t move gracefully like a normal deer but have jagged, or aggressive movements. Some have been described as moving like a newborn deer in awkward and disjointed steps.

Not Deer aren’t afraid of humans and may even attack if provoked.

Sightings of Not Deer

Accounts of Not Deer sightings have gone viral online in the last few years especially on the social media app Tik Tok.

Several reddit users have described their encounters with Not Deer. One user named Ampersand_Dotsys or Gris claims he was out for a motorbike ride late at night in rural Virginia when he suddenly felt an oppressive darkness fall over the area.

He sat for a while in silence watching for any predators or nefarious people lurking in the darkness. After he was convinced it was safe he got on his bike and headed home.

On the way he came across a creature like nothing he had ever seen before. A very large deer-like creature was standing in the middle of the road. It had the head of a cow but on the body of a deer. Its legs were too long for its body and it was extremely barrel chested.

Gris flashed his lights and revved his engine to try and scare it away. The Not Deer reared up and began to walk awkwardly on two legs. It shook its head wildly like a dog with a toy then hopped on two legs until it crossed to the other side of the road.

Gris wasted no time getting out of there and never returned to the area again after dark.

You can read more encounters with the Not Deer here or here.

Possible Explanations for Not Deer

It seems the most likely explanation for some Not Deer sightings is that people are encountering wildlife that are sick and deformed.

There is a disease called CWD or Chronic Wasting Disease that is quite prevalent in the deer population in the United Stated. This horrible disease can cause strange behaviors in deer as their brain becomes impaired.

The Not Deer also is somewhat similar in description to Native American folklore such as the Skinwalker.

If you enjoyed this article you may like to learn about Mothman, another Appalachian cryptid or the Australian Bunyip.