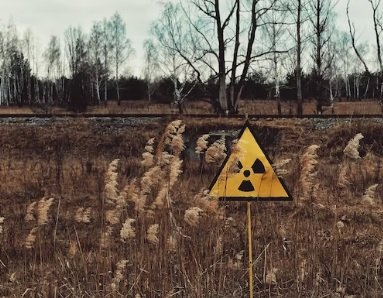 In 1990 three people in the Ukraine died in strange but similar circumstances. Their bodies were found in an elevator with a pair of puncture marks on their necks. The victims were missing huge amounts of blood but there was none left at the scene. A detective investigating the case claims he saw his partner killed by a giant spider in the elevator.

According to a report in a Turkish Newspaper the body of a man was found slumped against the wall of an elevator in a tower block in Ukraine. The victim’s skin was very pale and he had two puncture marks on his neck, each surrounded by bruising.

A post-mortem was carried out which determined that he had died from severe blood loss. Over 1.5 liters of blood were missing from the man but there was no blood at the crime scene.

Other tenants of the apartment block believed there was a vampire on the loose and many were to afraid to use the elevator.

The Second Victim of the Giant SPider

Just over a month after the death of the first victim another body was discovered in the elevator, stuck between the 4th and 5th floors. Witnesses heard a girls screams of terror coming from the broken down elevator. The local police and firefighters broke open the elevator to find the body of a girl, pale and with puncture wounds on her neck just like the last victim.

The girl’s death was attributed to an attack by an unknown person or animal. KGB Propaganda Minister, Leonid Keernev, claimed that the girl had died of a fatal heroin overdose. Her parents vehemently denied that this was the case and threatened Keernev with legal action.

The Police Investigate the Elevator

The police decided to set a trap in the elevator to see what was attacking the innocent victims. For 3 days a detective and a sergeant rode the elevator constantly, waiting for the creature to emerge. They were both armed with pistols, radios and flashlights.

Nothing much happened until the third day of the investigation when the elevator reached the space between the 5th and 6th floors. The elevator stopped and the lights went out.

The officers at first assumed it was just the elevator breaking down as it was known to do fairly regularly. That was until they heard a strange clicking sound increasing in volume from above them.

They removed one of the roof panels and shone their torches into the darkness, revealing a dark shape about 1 foot wide quickly moving towards them.

Before the officers could react a giant spider emerged from the hole in the roof and attacked the sergeant. The detective claims that the spider turned red as it filled with the sergeants blood. He then shot the spider, tearing off 3 of its legs and the side of its body.

When other police officers arrived to help they found the detective cowering against the wall next to the body of his colleague and the still twitching giant spider.

After this flamethrowers were used to clear out the elevator shaft. It is claimed that the spiders nest filled with eggs was found at the top of the shaft. The eggs were destroyed.

The Turkish Newspaper that broke the story claims that news of the attacks was suppressed by the government at the time. The article also theorised that the giant spider could have been a mutant caused by the Chernobyl Nuclear disaster just a few years earlier.

Most reports online claim this is a true story though there doesn’t seem to be a lot of evidence to back it up. Never the less it might pay to keep your wits about you the next time you’re in an elevator in Ukraine.