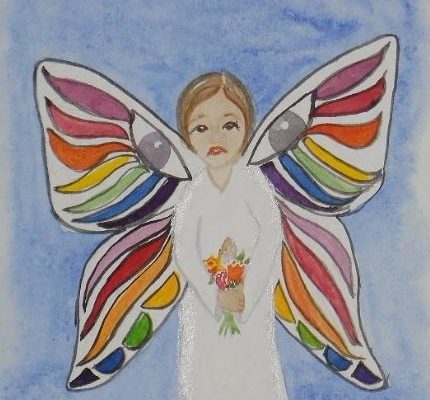 Several Reports of “Angels” Seen During a Devastating Tornado

An artists depiction of a butterfly person seen in Joplin during a devastating tornado. Image Source.

On the 22nd May, 2011 the town of Joplin, Missouri was hit by an F5 tornado that killed 161 people. During this horrific event and in the days following hundreds of people around the town reported seeing beautiful winged creatures, dubbed the “butterfly people”, protecting the people of Joplin. Was this just mass hysteria or sightings of a paranormal entity?

Some of the devastation caused by the 2011 Joplin Tornado. Photo Source.

On May 21 an area of low pressure developed over western South Dakota and a severe weather warning was issued. By the next morning a large area of the Midwest was under weather warnings predicting severe winds, large hail and tornados.

A massive F5 tornado developed and struck Joplin, Missouri on the evening of the 22nd. It grew to a size of nearly one mile wide during its journey through the city.

It was one of the deadliest tornados in US history, killing 161 people and destroying over 900 homes.

The Butterfly People of Joplin

Not long after the tornado had dissipated the people of Joplin began sharing stories of the strange things they had seen during the disaster.

Most of the stories came from small children who told eerily similar stories of seeing beautiful humanoid creatures rescuing people and protecting people from the storm. Some reported seeing the creatures take people up into the sky to “heaven”. Others saw the creatures covering people with their wings to shield them.

The stories came from people all over the city from different ethnicities and socioeconomic backgrounds.

Mason Lillard suffered life threatening injuries during the tornado as the truck she was in was thrown 300ft by the tornado. She was pinned inside the vehicle with an inch wide metal rod that came through the roof of the tuck, penetrated through her shoulder and exited out the side of her body piercing deep into the truck seat.

As the storm was approaching Mason recalled seeing the butterfly creatures walking about in the streets. After the tornado had passed and she was pinned inside the truck she recalls feeling a touch on her shoulder and assumed it was her cousin. When she turned around to look she saw two angels in white robes, one with dark hair and one with blonde.

In another account of the butterfly people a mother and her daughter fled their vehicle to try find shelter from the tornado. They jumped into a culvert and braced themselves. The mother recalls seeing their car flying towards them as the tornado approached and closed her eyes expecting to be killed.

A few moments later she opened her eyes to see that the tornado had passed and her and her daughter were miraculously unharmed. The daughter than says “Weren’t they pretty?”. The mother was confused and asked “Who are you talking about?” The daughter replied “The Butterfly People. They saved us!”

Another popular story tells us of a grandfather and two young boys who were stuck outside during the tornado. The group huddled together on the ground and the winds were so strong that the soles of the man’s shoes were ripped off. They boys reported seeing butterfly people hovering above them, protecting them from the winds.

A Mural in Joplin painted after the disaster titled “The Butterfly Effect”.

Since the events of the 2011 Tornado a mural of the butterfly people has been painted in downtown Joplin. Butterfly artworks have popped up all over Joplin and the butterfly has become a symbol of hope and recovery after the tornado.

Theories About the Butterfly People of Joplin

The town of Joplin is a majority Christian population, being right in the bible belt of the United States. The majority of the town believe that the butterfly people were angels sent by God to protect the faithful people of the town from the tornado.

About on half of Joplin’s children received counselling after the tornado to help cope with the trauma. Clinical Director of the Joplin Child Trauma Treatment Centers said many of the children reported seeing butterfly people. She believes the children imagined seeing these creatures to help them process the horrific events they witnesses.

Other less mainstream theories have been floated as to the identity of the butterfly people such as interdimensional creatures, aliens or spirits that all came to try to save as many lives as possible.

Whatever the truth behind the identity of the butterfly people is it is definitely strange that so many hundred of people saw such similar paranormal creatures at the same time.