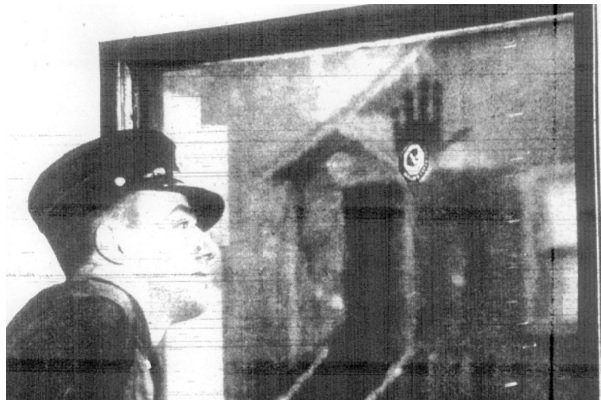 On April 18th, 1924 firefighter Francis Leavy had a sudden premonition that it was going to be his last day on the job. That evening Francis and his team were called out to a fire where 8 of the firefighters perished, including Francis. Later Francis’s handprint was found to be left on a window in the department and no amount of scrubbing could remove it.

Who was Francis Leavy?

A photo of Francis Leavy

Francis Leavy was a professional firefighter living in Chicago in the 1920’s. He is described as a pleasant, charming man who was dedicated to his job and his family. He lived at 6507 S. Whipple street where neighbors say he kept his yard well manicured.

Leavy was survived by a wife and two children who were supported by the city’s fundraising efforts for the families of fallen firefighters.

The Day of the Fire

A depiction of the firefighters, including Francis Leavy, working in the rubble of Curran’s Hall.

On the morning of April 18th, 1924 Francis and his colleagues were hanging around the fire station getting chores done. Francis was cleaning the windows when he was suddenly overcome with a foreboding feeling that something bad was going to happen.

He told his team mates he felt like this was going to be his last day at the fire station. He just suddenly knew that he was going to die that day. His colleagues laughed it off and they continued with their chores.

Later that day the team was called out to a devastating fire that was raging at a four-story commercial building named Curran’s Hall on Blue Island Avenue.

The fire was reported around 7pm by an off-duty streetcar conductor who noticed flames coming out of the windows and roof of the building. Witnesses noticed flames burning along a trail of liquid leading to two boxes sitting on the stairwell in the building. When the flames reached the boxes, they exploded.

The team wasted no time in getting their gear on and racing out to the site of the fire. Several different firefighting teams were at the site due to its ferocity.

The firefighters bravely entered the building and rescued many people from the top floors. Unfortunately while they were trying to put out the fire from the inside one of the buildings walls collapsed.

Many firefighters were pinned under the burning rubble. The Chicago Fire Department lost eight firefighters that day, including Francis Leavy, and more than twenty were injured. One civilian was also killed trying to help the trapped firefighters. Eight days later a ninth firefighter succumbed to his injuries.

In the years following the fire the owners of a sporting goods store contained within Curran’s Hall were convicted of murder and arson. They had set fire to the building hoping to claim their $32,000 insurance policy.

A close up of Francis Leavy’s handprint on the glass of the 107 Fire Station.

The devastated firefighters eventually returned to their station to find a strange sight. The window that Francis had been cleaning had his handprint on it. Many attempts were made to clean the handprint off of the window but nothing worked.

For twenty years Francis Leavy’s handprint was a revered attraction at the 107 fire station. Sadly in 1944 a paperboy was a bit too eager with his paper throwing and smashed the window containing the handprint. That was the end of Francis Leavy’s mysterious handprint.

If you enjoyed this article you may also like to learn about Resurrection Mary who is also from Chicago or other residual hauntings.