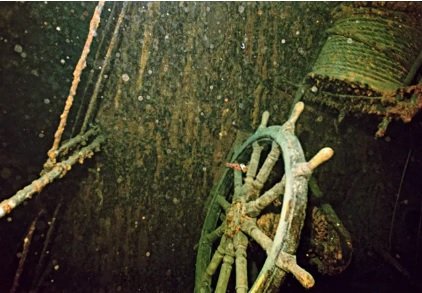 The SS Kamloops has lain at the bottom of Lake Superior for nearly 100 years but visiting divers claim they are not alone when visiting the shipwreck. The body of one of the deceased crew members, dubbed Old Whitey, floats amongst the wreckage of the ship with some divers claiming follows them as they dive.

The Kamloops was built in the UK for Steamships Ltd. of Montreal, Canada. She was smaller than the average boat sailing on the Great Lakes but had the dexterity to maneuver the smaller canals of the Lower Great Lakes and St. Lawrence River.

Shipping comes to a halt in the Great Lakes during the winter time due to the harsh icy conditions so ship owners push to get as much freight delivered as possible before winter sets in. The owners of the Kamloops pushed the ship to operate as late into the season as possible and it was one of the last vessels still operating in the beginning of winter in 1927.

The Kamloops last journey began in late November 1927, carrying a cargo of papermaking machinery, tar paper, coiled wire, shoes, piping and consumables. The ship was last seen heading towards the shore of Isle Royale at dusk on the 6th of December while a massive storm raged against the lake. The Kamloops and her 22 crew members were never seen alive again.

When the Kamloops failed to arrive at her destination on December 12 a search expedition was launched. Nothing was found until May 1928 when some fishermen recovered the remains of several crew members on Isle Royale. Five bodies were able to be identified and the remains were shipped to the next of kin. Four others who could not be identified were buried together at Thunder Bay.

In December of 1928 a message in a bottle was found at the mouth of the Agawa River by a trapper. The bottle contained a note from Alice Bettridge, the assistant stewardess of the Kamloops. The message read “I am the last one left alive, freezing and starving to death on Isle Royale in Lake Superior. I just want mom and dad to know my fate.”

The exact cause of the ships sinking remains a mystery to this day.

Discovery of the Wreckage of the SS Kamloops

An artist depiction of the layout of the wreckage of the SS Kamloops. Source:National Park Service.

The SS Kamloops was added to the list of Ghost Ships of the Great Lakes until the 21st August 1977 when her wreck was discovered northwest of Isle Royale. A group of sport divers were carrying out a systematic search for the ship when they discovered the Kamloops lying on it starboard side at the bottom of an underwater cliff. The ship was 260ft deep, its detached smokestack lying a short distance away.

Due to the extreme cold and depth at the site of the wreckage it remains remarkably well preserved. Very few divers are skilled enough to deal with the extreme conditions. Much of the ships cargo is still in its hold almost as fresh as the day it sank. There are also human remains floating about the ship, forever held prisoner by the SS Kamloops and the icy depths of Lake Superior.

As if it’s not spooky enough diving down to an insane depth in freezing cold waters the Kamloops has one famous corpse who acts as a guardian of the ship.

The body of one of the ship’s crew members floats around in the Kamloops’ engine room. The freezing temperatures have turned his body white as snow causing him to be given the name Old Whitey or Grandpa by visiting divers.

As more divers have visited the wreck of the Kamloops the legend of Old Whitey has grown. Some divers have reported seeing the ghost of old whitey in separate places to his corpse. Some claim to have seen his spirit floating along the deck of the ship or relaxing in the crew bunks.

Other divers claim that the corpse of Old Whitey would float along behind them as they explored, sometimes even reaching out and touching them.

In spite of this spooky behavior none of the divers felt threatened by the presence of Old Whitey. They believed he was happy to have the company after such a long time alone at the bottom of a lake.

Many divers make note of interacting with Old Whitey in their dive logs. They speak of “paying respects to Old Whitey” or “shaking hands with grandpa”.

It seems Old Whitey is happy to make friends with any visitors to his watery grave.

If you enjoyed this article you may also enjoy learning about the ghost ship Jenny or the Mary Celeste.