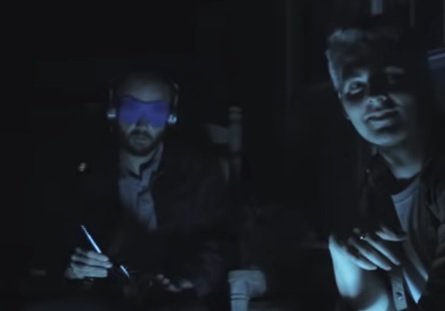 The Estes Method being performed during the documentary Hellier

Wouldn’t it be cool if we could clearly communicate with people who have passed on? A group of paranormal researchers have developed a process called the Estes Method which they believe is the best evidence yet of communication with the afterlife.

The Estes Method was first concocted in January 2016 at the famously haunted Stanley Hotel in Estes Park, Colorado. It’s creators Karl Pfeiffer, Connor Randall and Michelle Tate were working as full time ghost tour guides on the property and were discussing ideas for how they could communicate with ghosts with their guests.

The group often used a SB7 Spirit Box during their tours. This is a device which sweeps through radio stations, which paranormal enthusiasts believe gives spirits a medium to communicate with through the randomized noise.

The group were aware that how the user interprets the messages from the spirit box can be influenced by confirmation bias and group think. In order to combat this and get as pure a message as possible the team decided to use one person as the ‘receiver’, giving them stereo isolation headphones and blindfold so they could not be aware of what was going on in the room around them.

To replicate the experiment specific equipment is required to try to eliminate room for fraud.

Karl and Connor recommend the following:

A tight, solid blindfold that prevents any light getting in. These ‘eye bra’ types work really well.

An SB7 Spirit Box. This is the gold standard of spirit boxes and is much louder than some cheaper models on the market.

When running the experiment make sure the spirit box is turned up loud enough that the receiver can’t hear anything else going on in the room. Ask questions quietly and speak directly to the spirits rather than the person receiving.

Make sure the receiver is trying not to interpret what they are hearing but simply repeating any intelligible words that they hear.

Sometimes it takes several minutes for the spirits to understand how to use the spirit box. Some investigators suggest explaining how the device works out loud before beginning to help the spirits along.

Many paranormal investigators have claimed that they have produced real evidence of the afterlife by communicating with spirits through the Estes Method. The documentary Hellier follows a group of investigators using the method who seem to receive messages that are eerily relevant to their questions. You can watch some of their work in action here:

The Estes Method in action during the documentary “Hellier”

Skeptics claim the Estes Method doesn’t remove bias as it intends to but actually adds another level of bias. In having all words from the spirit box being interpreted by one person the process is more vulnerable to fraud from that one person.

This can be combatted by recording what is coming from the spirit box at the same time as playing it to the receiver so that any inconsistencies can be caught later on.

Some proponents of the Estes Method claim that the SB7 Spirit box is just providing a way to put the receiver into a trance-like state that allows them to pick up the messages psychically rather than hearing them directly from the spirit box. This could explain why sometimes the user will hear messages that aren’t picked up on recordings of the spirit box.

Regardless of how the method works it seems it is very important to have a trustworthy person in the receivers chair.

If you enjoyed this article you might like to read our review of two different spirit boxes or learn how to safely use a spirit box.