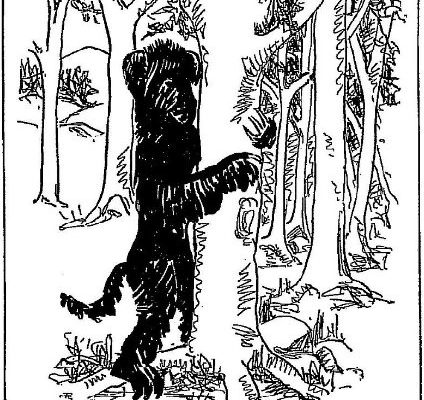 The hidebehind as illustrated by Margaret Ramsay Tryon for “Fearsome Critters”. Public Domain.

Have you been out in the woods and sensed a presence following you, only to turn around and see nothing there? Perhaps you were being stalked by the infamous Hidebehind.

The Hidebehind is know for how it stalks and kills its prey. It is said to be more active at night time, following victims for miles before attacking. It’s victims are usually alone or in small groups in the woods. Whenever they have their backs turned the Hidebehind sneaks towards them. If the victims turn around the Hidebehind conceals itself behind trees or shrubs.

Once the Hidebehind reaches its victim it will attack, instantaneously disemboweling them and then feasting on the raw meat. Sometimes the Hidebehind will drag the body of it’s victim back to its lair to finish feeding. Attacks are almost always deadly and some victims are said to die of fright alone.

The Hidebehind is rarely seen as it is so good at hiding in the forest. The earliest accounts of the Hidebehind describe it as being a huge powerful animal that is somehow able to hide itself amongst the trees. Other accounts report them to be humanoid and ghostly. They are slender and incredibly fast. Some say they have huge, sharp claws which they use to disembowel their victims. Other descriptions say the Hidebehind is just a black void with bright yellow eyes.

Reports of Hidebehind sightings and attacks were prevalent amongst the logging and lumberjack communities of the United States especially in Wisconsin, Minnesota, and Michigan during the 1800s.

How To Prevent Hidebehind Attacks

The lumberjacks of the 1800s believed the Hidebehind hated the smell of alcohol as people who had been drinking a lot seemed to survive the Hidebehind encounters unscathed. Others have claimed that alcohol severely burns the creatures skin and hair. In lumberjack culture this became a good excuse to do a lot of drinking while out in the woods.

If you enjoyed this article you may also like to learn about unexplained panic in the woods or the Skinwalker.