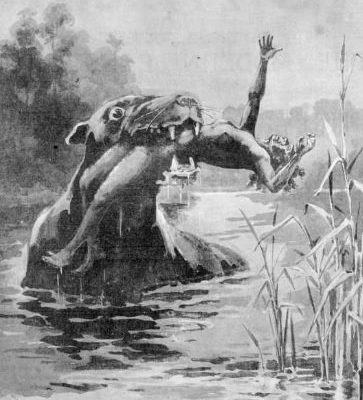 The Bunyip is described as an aquatic creature that sometimes ventures onto land. Descriptions of what it looks like vary and it is hard to pin down exactly what it is supposed to look like.

One commentator noted in 1878 that the aboriginal people appear to be so afraid of the Bunyip that they have failed to take note of its characteristics.

The most common description of the Bunyip describes it as being between 4-6ft long, having a shaggy brown coat, large ears, whiskers and no tail. They resemble a giant swimming dog or a seal.

Other descriptions of the bunyip include a long-necked creature between 5-15ft long. This version of the Bunyip also has brown fur and large ears but also has a head like a horse or an emu, many folds of skin and a horse like tail.

The Bunyip is said to be nocturnal and live in many different waterways such as swamps, lagoons, rivers, billabongs and creeks.

Escaped convict William Buckley spent many years living with the Aboriginals as he hid from the law. He wrote in his autobiography that while he lived with them he saw a Bunyip several times. He claimed the creature was commonly seen in the Brown River and had been known to kill people.

A man named Edwin Stocqueler claimed to have seen a Bunyip five or six times in his travels and had drawn pictures of what he had seen. Upon showing his drawings to some aboriginal people they claimed he had seen the Bunyip’s brother.

In the 1930’s a group of railway workers fled in panic as they heard to cry of what they believed to be a Bunyip coming from water near their camp.

In 1847 the Sydney Museum had a Bunyip Skull on display. After further analysis it has been decided that the skull was simply from a deformed camel or horse.

Some anthropologists believe that the Bunyip is a shared cultural memory from the time that humans lived alongside now extinct mammals that match the description of the Bunyip. Australian Aboriginals have lived in Australia for over 50,000 years.

Karl Brandt suggested in an article in Australian Birdlife Magazine that the Bunyip may have been a misidentification of the cassowary. The cassowary is a giant bird, similar to an emu but more aggressive when provoked. Cassowaries are known as the worlds most dangerous bird.

Despite its frightening nature the Bunyip has become a beloved character in Australian folklore. You can even visit The Murray Bridge Bunyip, an animatronic interpretation of a Bunyip named Bertha which can be found lurking in a cave on the banks of the Murray River at the Sturt Reserve Murray Bridge in South Australia.

If you enjoyed this article you may also enjoy learning about the Florida Skunk Ape or Nain Rouge.