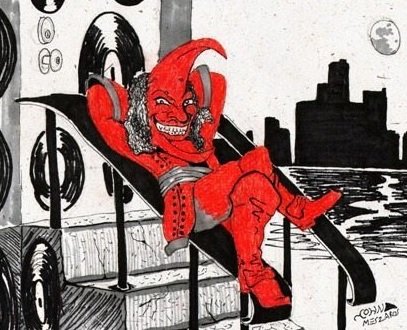 Each spring the city of Detroit, Michigan holds a festival called Marche du Nain Rouge in honor of a legendary creature, Nain Rouge, reported to reside in the area. Could this creature be more than just a legend?

The legend of Nain Rouge is thought to have it’s origins in a mixture of French and Native American culture. It is very similar to the Norman lutin, a type of hobgoblin, and the Native American accounts of the imp-like children of the stone god.

Nain Rouge is described by some as having being very red in the face, possessing bright glistening eyes and emitting a cold gleam like a reflection in a polished surface. It has sharp, pointed teeth and a wide grin.

Other’s describe Nain Rouge as being a small creature covered in black fur with the body of an animal but the face of an old man with blazing red eyes and rotting teeth.

The most famous legend associated with Nain Rouge is the story of Antoine de la Mothe Cadillac, the founder of the city of Detroit.

The legend goes that Cadillac was told by a fortune teller that he needed to pay respects to the Nain Rouge or very bad things would happen. Cadillac ignored this advice and when he ran into Nain Rouge he smacked it with his cane and yelled “Get out of my way, you red imp!”

As a consequence of his lack of respect a string of bad luck befell Cadillac. He was charged with abuse of power and lost his position of influence in Detroit. He was reassigned to Louisiana, then returned to France where he was imprisoned and lost all of his wealth.

Nain Rouge sightings in the centuries since have become associated with bad events. Nain Rouge is said to appear before disaster occurs as a harbinger of doom.

Nain Rouge made an appearance on the 30th July, 1763 before the Battle of Bloody Run where 58 British soldiers were killed by Native Americans. Reportedly the Nain Rouge was seen dancing among the corpses of the soldiers and caused the Detroit River to run red with blood for several days.

Two utility workers claim to have seen Nain Rouge in the days before the 1967 Detroit Riots.

Nain Rouge was reportedly seen climbing to the top of a telephone pole before jumping down and scurrying away before a huge ice storm in 1976.

Multiple people reported seeing Nain Rouge in the days before a great fire destroyed much of Detroit in 1805.

Just before surrendering Detroit during the war of 1812 General William Hull reported being attacked by a dwarf who emerged from the fog.

In 1884 a woman claimed to have been attacked by the Nain Rouge. She described the thing that attacked her as a baboon with a horned head with restless eyes and a devilish grin.

In 1996 two men reported seeing a creature that resembled Nain Rouge fleeing from the scene of a car burglary.

What is Nain Rouge?

Skeptics would argue that Nain Rouge is simply an urban legend pulled together from a number of cases of mistaken identity.

Nain Rouge could be a tulpa. This is a fictional character that comes to life through the power of collective consciousness. If a large group of people believe something exists some believe it can be created from this collective thought energy.

Nain Rouge could be a strange looking animal that is coincidentally seen around times of distress. Maybe during normal times it is more easily dismissed as just an animal.

Perhaps Nain Rouge is some other kind of paranormal entity like a demon or an interdimensional traveler who loves chaos and chooses to appear during times of disaster.

If you enjoyed this article you may also enjoy learning about the black stickman cryptid or another paranormal entity from Detroit, the demon hag.