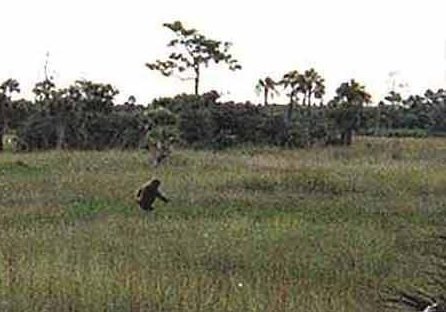 A photo of the Florida skunk ape captured by David Shealy

We’ve all heard of bigfoot, the giant ape that’s a bit too human that stalks the wilderness around America but what about his cousin the Florida Skunk Ape?

The Florida Skunk Ape is a bipedal ape-like creature seen in wilderness areas in and around Florida. It is said to be similar to a bigfoot but smaller in stature, about 5-7 feet tall. It is covered in reddish-brown fur and is said to smell incredibly bad, like a skunk that’s been startled.

The Seminole culture, a Native American people from Florida, have a legend of a creature called Esti Capcaki. Esti Capcaki translates as cannibal giant. The creature is described as being secretive, incredibly strong and very foul smelling.

Sightings of the The Skunk Ape have been recorded for as long as European settlers first arrived in Florida.

In 1818 local newspapers reported a man-sized ape rummaging in the food stores of fisherman along the shore in what is now Apalachicola, Florida.

In 1942 a man from Suwanee County reported an aggressive ape-like creature attacking him while he was driving down a rural road. He said the creature rushed out of the bush line and grabbed onto his vehicle and pounded on the door, running alongside the car for half a mile before fleeing.

Also in the 1940’s a small community in Putnam County, Florida become a hotspot for Florida Skunk Ape sightings. The creature became known to the locals as the Bardin Booger.

Reports of the Skunk Ape intensified in frequency from the 1950s to the 1970s. An organization called the Bigfoot Field Researchers Organization has collected hundreds of alleged sightings from almost every county in Florida stretching from 1955 until today.

Two sherrif’s deputies from Palm Beach County named Ernie Milner and Marvin Lewis had an encounter with what they believed to be the Florida Skunk Ape in the 1970’s.

They were out working in a grove near Palm Beach when an ape-like creature began to stalk them. They shot at it with their firearms and it fled. They were then able to follow a trail of footprints and found some hair that had become caught on a barbed wire fence.

One of these operators named David Shealy had some traps set for pests set with lima beans. He noticed that the traps had all been raided and strange footprints were leading up to them.

He decided to set a whole lot more traps and suddenly there was an influx of Florida Skunk Ape sightings in the area. Shealy believes that the wet weather and flooding in the area that year caused the secretive creatures to come closer to humans to get away from the flood waters.

Also in 1997 Ochopee Fire Control District Chief Vince Doerr was out driving in the Big Cypress National Preserve when he saw an ape-like creature cross the road in front of his vehicle.

He stopped his car, got out of the vehicle and followed the creature into the woods hoping to get a picture. He managed to capture a mysterious figure between the trees about 50 yards away from him. (See picture above)

Within two weeks of this sighting over 50 people reported seeing a similar creature in the same area.

Believers in the Skunk Ape assert that it is a species of ape that has remained undiscovered due to its intelligence and its desire to remain unseen.

Skeptics believe that all of the encounters with the Florida Skunk Ape are either cases of mistaken identity or simply hoaxes.

Many people believe that the Florida Skunk Ape is an orangutan that has escaped from nearby research facilities. There are a number of facilities in the state that breed and experiment on monkeys of varying shapes and sizes.

If you enjoyed this article you may enjoy reading about the OG Bigfoot or the story of a train hitting a bigfoot in the 1880s.

(Affliliate links. We may earn a commission.)