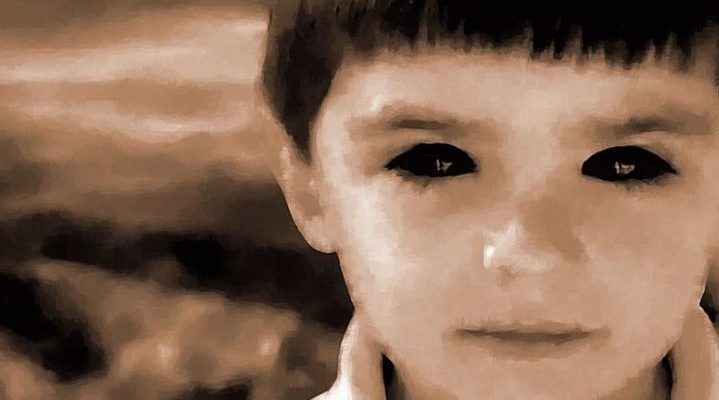 There have been reports all over the world of strange children trying to get access to people’s homes or cars. When they are denied access the children become angry and their eyes turn fully black. Who are these black eyed kids?

Picture this! You arrive home after along days work are about to get out of your car to go into your house. You look through your window and you see two kids standing on your doorstep. You can’t put your finger on it but there is something odd about those kids.

They are wearing bedraggled old clothes and look to be 10 to 12 years old. Just looking at them sends chills down your spine but you don’t know why. They’re just kids! They walk over to the car and you question what they’re doing. They play dumb. ”Let us in!” They say. They keep hounding you. “Ley us in! Let us in!”

These kids are making you squirm. It is like you want to lock your car door and drive away, yet these kids have some kind of hypnotic hold on you. Creeped out you look at them a little bit more closely. Long arms hang at their sides, their skin, pasty, but most of all it is their eyes.

Their eyes are jet black. Now you’re freaked out and you search the car for your phone to get help. When you look up from dialing your phone you realize they have disappeared into thin air!

Stories like this are becoming more common place and more people are reporting seeing these black eyed children. Brian Bethel, a Texas reporter, was the first to write about his story in the 1990s. Since then the reported sightings of Black Eyed Children have skyrocketed.

What do black-eyed children do?

According to the stories from the last 20 years a child would come up to your house door or your car window asking for help. The moment they approach you will be scared and it will feel like you are under their power. Usually they wear dark clothing or a hooded sweatshirt and they ask to come in or maybe use your phone.

If you refuse they will come back with threats such or begging such as ‘ I need to come in’ or say ‘please, I need to use your phone’. People say they start to open a door a little bit or if they’re in a car put the window down a bit more, trying to force their way in. It’s like the child/children are hypnotizing you with their minds.

Then they lift their head up or take their hood off and flash their black-eyes While news coverage of these beings has claimed that stories of black-eyed children have been recorded since the 1980s the first written accounts we could find were 1996 postings written by Brian Bethel on two alleged encounters with black-eyed kids.

Bethel also had an encounter in Abilene, Texas in 1996, and claims there was another reported incident in Portland, Oregon in 2012. In 2012, a horror film called Black Eyed Kids was produced. The director claimed that the creepy kids were “an urban legend that’s been floating around on the Internet for years.”

An episode of MSN’s Weekly in 2013 helped further spread the legend on the internet.

What are Black Eyed Kids?

Black-eyed kids cannot be human as black is not a natural eye coloration for a human. Every healthy person has a white sclera. Animals have a very dark sclera. People who have met black-eyed humans say these individuals have a solid black eyes with no sclera at all. The black-eyed kid’s pupils and iris’ are completely black; the eyes have no whites at all.

Speculation about what they are runs amok from the extraterrestrial hybrids to take over the planet all the way to men in black, hungry ghosts from Japan and China to even being vampires. These children could fall under a number of paranormal classifications such as fairies, djinn or demons.

Skeptics such claim the stories are all just fabricated or cases of misidentification. An Inquisitr article advised readers to “file black eyed children under the same heading as bigfoot.” Stating that there is “no evidence of their existence, just subjective testimony that ranges from reasonable to suspiciously fame-whoring”

As believers in the paranormal however we know not to completely dismiss stories because they lack physical evidence but of course always take them with a grain of salt. Just because something can’t yet be proven doesn’t mean it doesn’t exist. Perhaps we just need more time to gather evidence.

If you liked this article you may be interested in these books by the same author:

Paranormal Catalog may earn a commission from anything purchased through the following links:

Republic is a story of sex, drugs, money and power, and the struggle for freedom and justice in a neo-liberal society.

This is a graphic story of cannibalism, blood drinking and human sacrifice set in a small New Zealand town in 2019.

Shooting Albatrosses is an evocative coming of age story set in and around the beaches of Christchurch, New Zealand, after the 2011 earthquake.